There are 4 Assisted Living Facilities in the Dayton area, with 3 in Dayton and 1 nearby.

Caring.com has helped thousands of families find high-quality senior care. To speak with one of our Family Advisors about assisted living options and costs in Dayton, call (855) 863-8283. 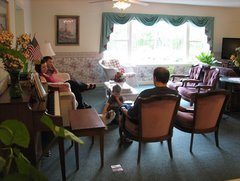 What to Consider About Assisted Living in Dayton

The city of Dayton has about 7,200 people and is located in the southeastern region of Tennessee. An estimated 1,100 residents are aged 65 and over, making seniors the second largest age demographic group in the city. These seniors receive services through the Southeast Tennessee Area Agency on Aging, an organization that provides non-medical transportation, nutrition services and support programs, as well as one senior center.

Benefits and Drawbacks of Assisted Living in Dayton

Paying for Assisted Living in Dayton

Other Options in Dayton, TN