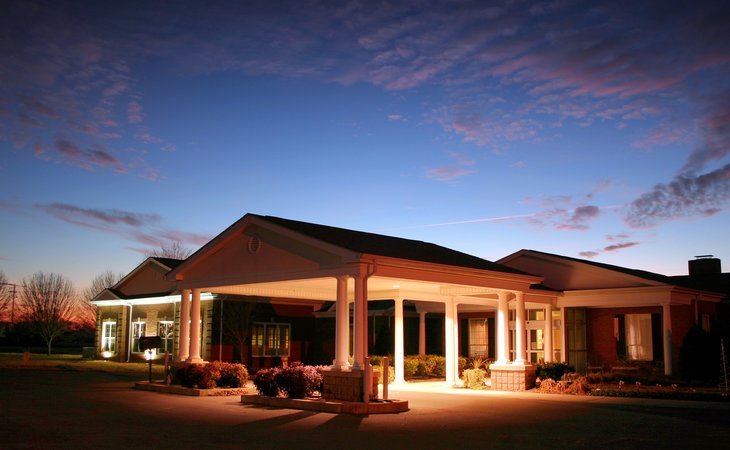 Stones River Manor is a very nice facility. To us and her parents, one with a spiritual-based environment is important. So, in that respect, it was good. However, they were expensive. It would have cost nine to ten thousand a month, which may be close to the others, but still high. The staff was very pleasant. We even met with the director, and he was very nice and very open. He didn't try to hide anything like, "Everybody's great, nobody dies here". Well, we know that's not true. He was very upfront but very nice. There were not a lot of residents out and about. But the ones we did see, it was all very pleasant, and you did not see any of the residents shy away from staff. I think it's important. Everything I thought was very well kept meticulously. Very well-kept grounds, very clean inside, and has no smell. They have many different amenities inside. It's a large complex, but a lot of different meeting rooms that were convenient to the rooms that are spread out. I did find it interesting that in one of those meeting rooms, to be allowed to use it, you had to pay a fee. They had big giant cages with little birds and decorations. Activities were very well lined up on board. They had activities listed, I couldn't believe how many activities they have. The only thing I was a little bit surprised about, was how small the rooms are. We did get to go into a resident's room. What's cool is these rooms are kind of surrounding, at least where we went into; It's almost like a pod, so there's a general meeting area in the middle. This lady was out at a table, and they're very nice. It's not just like a cold, sterile meeting room. It's carpeted, dark woods, maybe even a fireplace. She was sitting out doing a puzzle just outside her room, but she didn't have to stay in. Her room, while very nicely decorated, is very, very small. I think their sizes were like 17 by 12. I think they offer bigger rooms. Maybe they have a double of that. But of course, the price for us would have been beyond our capabilities. We did not see any other rooms other than that lady's, and also one that was unoccupied. To us, the ones we were looking at that would have been affordable were just too small. I never saw activities being done, but I saw the list and it was just something all the time. I don't know what the participation level would be, and how the activities were. I just know that by the number, there was a lot to do. They also had a worship area.

For my aunt it becane home for her. Staff were like family. The residents were friends. If your looking for a homey feel rather than clinical feel. Stones River Manor is it. The staff is there because they care and love the residents. The social activities are like no other. Good home cooked meals.

The care my aunt received was excellent. The rooms are spacious enough to have the furniture of our choice. The activity staff are encouraging even when my aunt was difficult to attend. They travel to Wal-mart and out to eat. Love the family atmosphere. Very thankful we chose Stones River Manor.

Stones River Manor is very modern and has some nice, sunny areas for the residents. It is clean and looks like a very well-lit, friendly place. The staff there is great. The staff was very interested in my personal situation with my mom. He was willing to look at different options and explained some of the things that I needed to know about. He was very informative and very compassionate. I felt that he was certainly on my side, trying to help me figure out what to do. When I went there, it was at lunch, so there were a lot of people eating lunch. They did show the activity room with bingo and puzzles. There was a piano there, so there's plenty to do. The rooms were smaller than what my mom is used to. The rooms did not have a kitchenette, so that's one thing. It is not a showstopper. It was the one downside; but other than that, the rooms were very organized.

Stones River Manor is a community with independent apartments. Everything was clean and nice. It's pretty open and it's new. They have activities like bingo, a bus that takes them to events, and all those things that other places have. The food was very good and their dining room was nice.

Stones River Manor seemed like a really nice place, and the staff was very nice. The rooms that we looked at were nice and more apartment-style.

My experience with Stones River Manor has been positive. They provided care for my grandmother and a good amount of activities for the residents to do. They have an arts and crafts fair once a year, a yard sale, have nice birthday celebrations, and offer different styles of housing from small apartments where residents can come and go as they please to a section where they lock residents in so they can't escape and hurt themselves due to having alzheimer's or dementia. It's called the Assured Care Unit. One time the lady who lived next to the keypad escaped. They did a good job keeping things clean, and the food is pretty good. They have a day where family gets to eat with them. They are a non-profit organization that is sponsored by the churches in town. That means they have a lot of bible studies. I think it would be a great place for you, Carey C.

The memory care unit at Stones River Manor was much larger than in other places. It appeared to be one large grouping and I'm concerned that my wife would not adapt well to that. Some things they have are very nice, it's a Christian-based organization and it's super in that regard. I met with the director who took me on the tour, and another person there that oversees the patients. This place is my second choice, and all the other professionals I consulted like my doctors, this was their first choice. They are offering about the same activities for memory care as other places, like small group things and craft activities. They have a lovely aviary with a lot of birds in it, they also have an aquarium which I understand is soothing for their clients. I had no misgivings about this place, they were very good. The thing is I was looking for a smaller group setting for my wife. The staff was very caring and nurturing.
Get Costs

Other Senior Care in Murfreesboro, TN