We just moved my father-in-law into Victory Hills Senior Living. Unfortunately, he just went into hospice care yesterday so we actually have to clean out his apartment already in less than a week's time. It was fine, he liked it, and didn't want to leave. When we first went in for our tour, the office manager said, "You probably saw on the reviews that we've had bedbug problems." I said I didn't, but she was honest with us and said that it used to be really bad but they got it down to 10 percent. In a few days we were there, we didn't notice anything, but I had a gentleman that was sitting outside, an elderly man that said he wished he and his wife had never moved in because of the bedbugs. I said, "So you do have them." He says, "Oh, yeah, I got bites all over my arms," and he showed me his arms. We just bought a bunch of furniture just for my father-in-law to move in and we're not even going to keep the furniture. We're going to put it outside and put "free" on it because we don't want to take it and risk any chance of bringing that home. Our personal experience was fine, but honestly, after he told me that there is still an issue with it, obviously we won't be there long enough to know. The staff was great. The office manager that we dealt with was very nice. I don't know how this is going to go once we tell them today that my father-in-law was going to go. We just signed a year lease. I hope that there's not going to be any problem with getting out of that. The second night in, we had some thunderstorms and heavy rains, and it rained. It leaked and there was a puddle on the floor from the living room window, but maintenance came and cleaned it up pretty much right away, so we didn't have any issues with them. I don't know what they were going to do to actually fix the problem, and so that it didn't keep occurring. They didn't do food, it's independent living. I don't know about the dining but I saw a room, and to me it looked nice. There were tables and it was all set up, but I never saw anybody in there. It's almost like it was closed off, not to be used. I could be wrong, but I never saw anybody sitting in there. As far as activities, I don't think they really do activities. You pay a $500 community fee, and that goes towards the library and the common area that families can come to. We had to pay that $500 and basically wasted our money. Over the weekend, I believe it was Saturday, there were a couple of tables set up and somebody there was selling jewelry. I saw quite a few ladies going over and looking through the jewelry. They invited me over, but I didn't need any. That's the only thing I saw going on.

We at Victory Hills very much appreciate you taking the time to share your experience with us. Your input is important to us as we strive to offer the highest level of service. If you have additional questions or comments, please feel free to reach out to the Administrator directly. Sincerely, Victory Hills

My grandmother has decided that Victory Hills is the place where she wanted to stay, so she will be moving in. The location, appearance, price, and the amenities stood out to us. There were so many activities. They have outings, they have transportation to and from doctors' visits, and they have a church. They offer two to three meals a day, which is a plus. The tour guide was very patient and very thorough. The staff members are very professional and courteous. The place is nice, but they're undergoing a lot of renovations, so there's going to be a lot of improvements. The ambience is very sociable. I like the leisureness of it, I like the look of it, and I like the feel of it. It feels very welcoming. The manager is wonderful. We fell in love with the place, it is close to us, and the price is right.

We got bed bugs in Victory Hill Senior Living. It's not very good and my friend wants to get out. They have not been treating him very well. I've eaten there three times with him, and it's absolutely horrible. The help in the dining room is not very nice. I thought he was exaggerating until I ate there and realized he was right. The activities are not stimulating enough. They have bingo, they have a van to take them to the store weekly, but the van has broken down since he moved there, and they have not taken him anywhere. It smells. I think they should have let him know about the bugs before moving in. The food is a zero; it's not healthy at all. It's like fried french fries, the salad is not even green, and he doesn't get vegetables. Also, the housekeeping isn't consistent.

Victory Hills Senior Living has recently been purchased by an investment group called the Tutera Family, which is very highly regarded in this area. They're right now in the midst of remodeling and they even re-staffed the place. The lady who showed me around was very nice and very professional. The single room she showed me wasn't big and was undergoing renovation as well. They have a library. The prices for assisted living were a bit higher than the independent living prices. They provide cleaning services once a week.

I was able to visit Victory Hills Senior Living. Everybody was very pleased that we would take a look. Ive been there to visit someone, and that person seemed quite pleased with the community. It seemed like a big building, and its a pretty large facility. They seemed to have games one day, and they had access to go out. My friend had a nice room with a nice sitting area. She looked great.

Awful. in 2 years we went through 4 executive directors, 3 business directors, 3 chefs, 3 maintenance supervisors, 3 marketing directors, 3 chefs, and 2 nursing directors. at the time i left, they had still not replaced the athletic director. elevator was out of order for a year and a half. the other was stuck with residents between floors numerous times and paramedics once carried a patient down 6 flights on the fire escape strapped to a dining room chair. i myself fell on poorly painted concrete in front of the building and broken my back. i also dislocated my knee. not even a call from their insurance company. other residents suffered injuries as well, and talking and bresking a hip. the food went from bad to awful and they began charging for extra sides.
See all Independent Living reviews (6) See fewer reviews
Get Costs 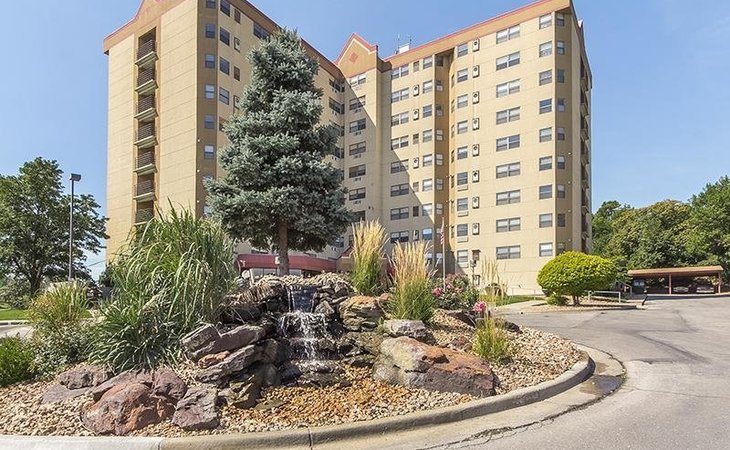 We are conveniently located near the Legends featuring upscale shopping, restaurants and cultural attractions. As the preferred independent and assisted living community in Kansas City, Kansas, our caring, expert staff provides support and assistance when you need it. Our goal is to promote your independence and the quality of life you desire.

You’ll have many choices whether it’s our delicious meal options prepared by our top chef, exciting social activities or organized group trips. Victory Hills has everything you are looking for in a retirement lifestyle!

At Victory Hills, we’re inspired by you! Schedule your tour today, and see why so many have chosen to call Victory Hills home.

Welcome to Victory Hills Senior Living Community. We are conveniently located near the Legends featuring upscale shopping, restaurants and cultural attractions. As the preferred independent and assisted living community in Kansas City, Kansas, our caring, expert staff provides support and assistance when you need it. Our goal is to promote your independence and the quality of life you desire. You’ll have many choices whether it’s our delicious meal options prepared by our top chef, exciting social activities or organized group trips. Victory Hills has everything you are looking for in a retirement lifestyle! At Victory Hills, we’re inspired by you! Schedule your tour today, and see why so many have chosen to call Victory Hills home.