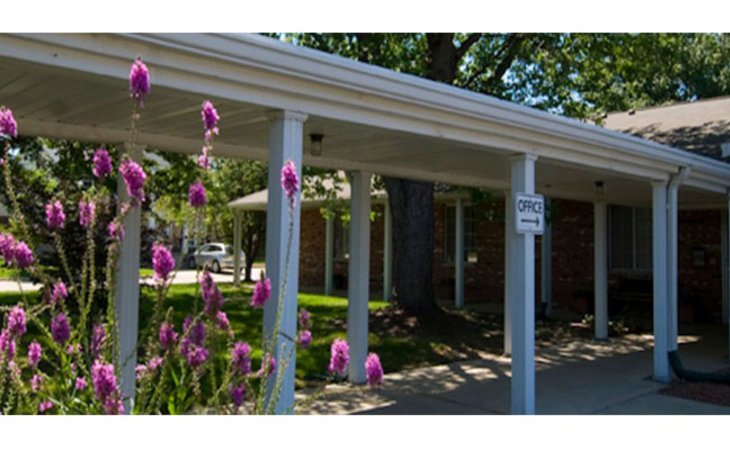 We toured Maryhaven. It was an independent living to a certain degree, and they offered meals. They were very tiny rooms, only about 300 square feet. You had a closet, a bed inside your main living area, and then a little bathroom. It was about a thousand dollars a month. It was kind of a hard pill for my dad to swallow. He can't even have somewhere to sit down to and bring a meal to inside the room. They had a laundry facility within. I think it was all one floor. They had their own access to their rooms, and they didn't have to go into the community. He liked the fact that he had his own access to his room. There were no hallways to have people walk through. He liked the fact that the meals were provided, and he didn't really have to worry about grocery shopping, all he had to do was have some small snacks for himself. But he also said that he is not even claustrophobic, but he feels claustrophobic. He felt like he could only put a twin-sized bed and a dresser and that's it. The staff was incredibly sweet. She asked if we had any questions and what we were looking for. And if there is something that they could do to help ease the transition. They have their little pictures on the wall of the veterans that lived there. My dad's a veteran. She knew what she was talking about. She offered up information. She did say that the time that we were checking out the little apartment, they were increasing their prices. It was going from like $960 or something like that to $990, so it was going to be a $30 increase before we even got in there. Which was kind of a bummer. It's on a very quiet road, kind of an in-between, and it's not the main drag for where they're at. But it is local and within half a mile there is a grocery store. Within three miles there is a mall if they want to go to the mall. It is easy to access; I did not have a hard time finding it. It was very, very small, and to justify a thousand dollars a month, I'm like, "wow." But they had somebody who come in there twice a week to help them clean their rooms. They have their meals set there, too. I would say, based on how tiny it was, that was just not what we were looking for. But I can see why people like it. If you're looking for meals to be secured and for you to be in a safe, warm place, there you go. There are no complaints other than the fact that you are in a very tiny area and if you are still trying to have family come over and all that kind of stuff, it's not something that I believe will work. The staff was wonderful, and she was incredibly kind and very understanding. We did have an appointment, but she was on the phone with a social worker, and they were trying to get things situated. And she apologized. I had no issues with her. You could tell that she tries to make the transition for a lot of these people easier. We were there at an off time, and the residents had already eaten, so, it was not offered for us to stay for a meal. She did say that they've never had any complaints and the patrons typically enjoy everything that's going on. There is also a small refrigerator in their room if they wanted to have snacks or things of that nature, and you can still have a pizza delivered. You could tell that the rooms were taken care of, but the outside was a little less than to be desired.

Hello Lauren, we appreciate you taking the time to leave us this feedback. Please don't hesitate to reach out if there's anything additional we can do for you.

My friend moved into Maryhaven, and it's actually been very nice. It's very clean, the meals have been really good, and he's really happy with the staff as well. His apartment is good, and everything was clean and in working order. They take them shopping twice a week. I know he's been watching a lot of movies in their recreation room and playing cards, but that's really about all he's done so far. His meals, his utilities, and everything are included in the cost, so it's been very beneficial for him with keeping track of his bills and his needs -- everything is just there for him.

Maryhaven is a non-restricted property in terms of income. The challenge I have is that the units were very tiny. They are just one room. They offered a suite, but that is above my income level. The staff was very helpful, nice, and answered all of my questions. It is an older structure, but it was clean and neat. They had a place where people can gather and socialize. If I choose Maryhaven, I have to give away all of my belongings to live there. If there was a suite available for the price of the one room, I would definitely be moving to Maryhaven.

We went to Maryhaven. They have common meals and more programmed activities for residents there. The dining area was well kept up and clean as was the common areas where activities take place. The one peculiar thing about Maryhaven is that all of the apartments open up to the outdoors. Instead of an apartment building, there is a series of rooms. I hate to say it's like a motel, but it's that kind of an arrangement. So to get from your room to the dining area or the common area, you have to walk outdoors through a little cloister kind of thing. The structure was well kept up. There was not a lot of land. From one side, you had a large parking lot and on the other side, you had a suburban subdivision. A greater percentage of people there were not physically mobile.

I went to Maryhaven. They were asking way too much than what was stated, the rooms were more like studio apartments, and it looks more like a hotel, than anything else. The people were just sitting around, and not doing much, or anything.

My father has moved into Maryhaven. It is a good place, and I don't have any complaints as of yet. Upkeep has been good, and it's very clean. The staff is wonderful, too. There are many different activities. The dining room is very nice. The residents sit down, someone comes up to them and asks them what they would like, and they bring it to them. The dinner I had was very good. They have field trips, arts and crafts, Bingo, and trips to the grocery store.

I chose Maryhaven. The room is a studio, so it's small, but that's all I can afford. I signed the lease on a Saturday, and on Sunday they moved my furniture in. The staff was very pleasant. They clean and they serve meals three meals a day. They have bingo, they take the residents on trips, and they have shuttles that go to the grocery store. It's not a new community.

Dear D.B., Thank you so much for taking the time to post your comments about Maryhaven. We are so happy that we can offer affordable housing options that include three meals, housekeeping, transportation, utilities and activities. We value our residents and are dedicated to your continued comfort and happiness. Warm Regards, Maryhaven Staff

I toured Maryhaven, but it wasnt right for my aunt. It was decent. The room was very small and claustrophobic. The staff was friendly.

Thank you for your feedback, Melissa. Maryhaven offers Affordable Housing for seniors, starting at just over $900 per month for a studio, including 3 daily meals, utilities, housekeeping, activities and transportation. While the studio apartment may have felt on the smaller side, there is incredible value for the price! We do offer larger apartments that may have been a little higher than what your aunt was looking to spend, but those do afford at least double the space of a studio apartment. We also offer several common spaces for socializing and group activities, so those definitely serve as an extension of our residents' living space. I hope that your aunt has found something that is comfortable for her. We appreciate your consideration of Maryhaven, and we wish you and your family the best! Services and Amenities of Maryhaven

At Maryhaven, you'll enjoy all-inclusive amenities at an amazing value.

We'll take care of the maintenance, cooking, social events and more, so you can stretch your budget even further. Need supportive services -- we have partnered for that. We've thought of everything. At Maryhaven, you'll gain lasting memories, fellowship and friendship which are priceless.

Here are some of the features that make life at Maryhaven a delight:

All Maryhaven Independent Living apartments come with a long list of features, such as:

Other Senior Care in Southgate, MI