Brookdale Bellingham's general appearance and layout were good. Overall, the facility was very good, but when I toured it, I felt like they didn't have enough staff members on hand. There also didn't seem to be enough activities going on in the memory care facility. The person who showed me around did a good job, but I just didn't get the best vibe from the interaction between the care staff and the residents staying there. I'm not saying they were being neglected, but I just didn't feel there was enough stimulation, social or otherwise. The dining area was very nice and it looked like they had a very nice, well-rounded menu with good things on it.

I really like Brookdale Bellingham, and it does accept Medicaid. There are lots of great amenities. It has memory care and assisted living which is what we're looking for. It was a nice size and a little bit smaller and easier to maneuver. They have a shuttle that takes them to places, a beauty salon, and a movie room.

I visited Brookdale Bellingham and was impressed with the place. I did not choose it because it didn't have an option for if you need to switch to Medicaid when you run out of money. The rooms were nice and clean but on the small side.

My parents are at Brookdale Bellingham. They have an apartment. They have their meals provided there. They have aid with their medications, aid with any exercises that my father needs or any physical therapy and also aid once in a while for separate care. I would recommend that they check this place out.

My dad and stepmom are both in Emeritus at Bellingham. They have a very nice one-bedroom apartment that is pretty large with a big bathroom, two huge closets, and a little kitchenette, and then they get three meals a day. The only thing I don't think they really like is that they have to eat dinner before six, and they close the dining room at six. But, other than that, it is a very nice place and they seem to enjoy it very much. I went with my father back in April and looked at three different places, and it had, by far, the biggest one-bedroom. This place is very nice and probably more expensive, but they are very spot on in their care and medication management and stuff like that. We put my father on the management thing, which is an extra charge a month, but at least he gets his pills twice a day or whatever it is he needs, and if he doesn't show up at the nurses' station they'd come down and get him.. My stepmom is learning to like it. She has a therapist that's been talking her into doing more things, and my dad doesn't have much of a memory, so he doesn't remember what he is missing as long as he is with his wife, which is the most important thing to him. They have Bingo, bridge, music nights, wine tasting night, and lots of different music things every week. Somebody comes and sings, and plays the piano or the violin, that kind of thing. There is a nice walking path around the facility itself, and I think there is a city college that is a few blocks away that has a big walking path around their campus, so they have been going out walking at least once a day, and sometimes they go twice a day even, so it is nice. They have different things where people join groups, like the singing or choral group that Roselyn was going to join. They are very accommodating and they even have a lady that is like a concierge. If you need a ride somewhere in the morning, like when my dad first moved in there, he went every day to spend his day with his wife at the nursing home, so they would drive him over there and then pick him up at 4 o' clock or whatever and drive him back in the town car, which was kind of nice. Compared to how you imagine a facility would be, and I have heard of other places where you have to share a room with a stranger, I think this place is very nice. It seems to be very clean. I even met the maintenance man, and he was on top of everything. They are very nice, but they're not cheap.

We couldn't afford to go into an independent living facility. They're either too expensive or have a long waiting list. Merrill Gardens at Cordata was fine. During the tour, they showed me a nice, empty apartment. The staff was very nice, and the people I saw in the common areas looked happy and friendly. They have a recreation room with all kinds of activities and other scheduled activities during the week. But they didn't have laundry facilities in the apartment which would have been difficult for me because I have a spinal issue. And walking halfway down the main floor would have been really hard for me to do. Another issue for me was I'm older than my husband, and they only allow people 60 and over. He's 55, so that wouldn't have been an option. A lot of places would consider if you have a younger spouse and they'll let you come in anyway. But this place won't.
See all Assisted Living reviews (7) See fewer reviews

We visited Brookdale Bellingham. There were several things that we like about it. The staff was very caring. The food was very good. The people we met there seemed to appreciate that they had a good place to live. The cleanliness was fine. It was not brand new, and it was not pristine, but it was comfortable.

We are in Brookdale, and it’s a really nice place. The food is good, the staff is excellent, and the rooms are comfortable. It’s expensive, but that’s a relative thing. For some people, this would be modest, for others it would be impossible. It’s comfortable and clean. The dining room and memory care staff is very good and caring. I am the primary caretaker of my wife, so when I occasionally have to leave, she can be down to the Garden House, a memory care in the same facility. Here, you have room service once a week, and they clean up and take care of the laundry. They allow pets, so we could have our pet with us. The Brookdale memory care unit is a separate entity. It’s in the same building, but it is such that they have people there with various levels of Alzheimer’s, dementia and very advanced Parkinson’s. It is a sensory locked unit, so you can get in, but you can’t get out, so to speak. My wife and I stay together until such a time that she will perhaps need more care than I can provide. We’re staying in a comfortable apartment with a very small kitchen and attached living room, a small bedroom on the ground floor with a nice view to a green belt. It’s quite light which our cat likes. You must keep the cat happy. It’s a big change for us. My wife periodically goes to the memory care unit when I have a need to be out of the unit for a while to go shopping. They have a program here called the Bridge Program which you pay a fee for and allows you to put your partner or spouse into the memory care unit. The memory care facility does not have super high-end stuff. They’re clean and serviceable but not luxurious.

My mom has lived at Merrill Gardens for 2 years now. She particularly enjoys the "anytime" dining feature which allows residents to eat whenever they want (like at home) and from a menu with surprising variety. The "restaurant" is the center of her social life and the smaller size of this facility allows everyone to get to know each other, which is nice. The staff is excellent and makes a point to get to know the individual residents and accomodate their adjustments. My mom was made "ambassador" to greet newcomers which helped her, as a retired businesswoman, to feel she had a job and also took advantage of her social nature. I appreciate that personal touch. At this point, she has not needed much assistance, but what interaction we have had with the caregivers in that department has been very positive. I am kept very well-informed about any health issues she experiences when I am not there. So the staff takes care of my needs as personally as they do hers. They were a godsend in the throes of the move itself also: efficient administrators and part time psychologists! The facility is lovely and immaculately kept: both the main building and the cottages for the more independent. This is also a key thing I liked about Merrill Gardens, which is hard to find: as residents need more assistance they can stay right there and get it, rather than be moved away from their friends and home to get it. Cottage dwellers move up to the main building when they need more help and there the level of assistance available is quite comprehensive. An Alzheimers wing is also available. This is really nice as moving my mom from her home once was difficult enough! I highly recommend this facility.
Get Costs 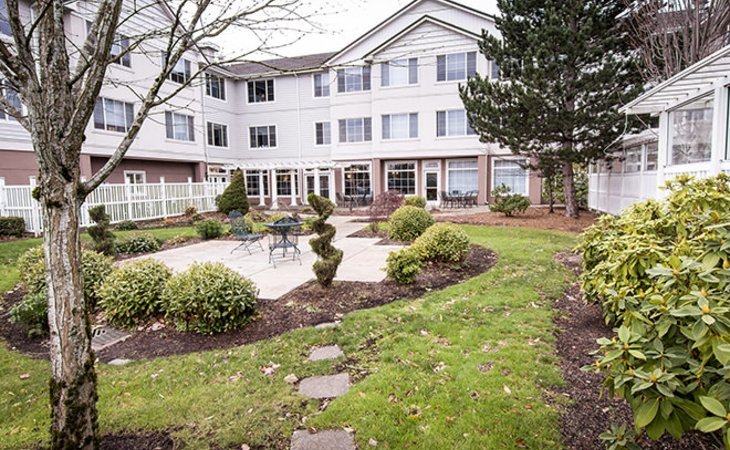 Services and Amenities of Cordata Court

Other Senior Care in Bellingham, WA