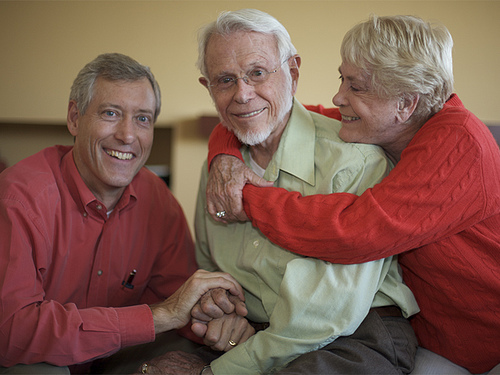 Stratford Pines was set up like a hospital; they had a waiting list. It's hospital food, which was kind of bland. The room wasn't clean. Nothing was good there. The people were just wandering around doing whatever. They had no programs. They didn't offer for you to eat there; you have to pay for it if you want to try the food.

My father moved in to Stratford Pines. The place is fine. The staff is great, and they do a nice job taking good care of him. They have exercise every single day, music, church services, different craft-type activities, and so on. The place is very clean. Everything is very expensive, but for the quality of care my dad is getting, it's good.

Highly disappointed in the care my mother received. I would not recommend this facility to any family needing competent care for their loved ones. If you are not prepared to be a full time advocate for the patient, don’t leave him/her there. The staff’s follow through was poor, to say the least. Many times there were no staff around for patients in need...very understaffed. My mother needed to use the restroom and pressed her call light to be helped. An hour later someone came to find it was too late...very embarrassing for her. Please note...my mother is very easy to care for...not a complainer or one that needed lots of attention. Her meals regularly came cold and not worth eating. One day they didn’t bother feeding her until she finally inquired if she was going to get a meal! Please don’t be fooled by the facade and the advertising on their website. Do your homework. “Certification” does not mean qualified!!!

My husband is in MidMichigan Stratford Village. This nursing home is part of the MidMichigan Hospital. It is very clean and I have no complaints with it. It is supposedly the best nursing home in the area. It is difficult to find a good place, so he was lucky to get in there. My husband is there because his situation has gone from bad to worse. He is not walking or feeding himself and he has just deteriorated pretty rapidly. However, he is getting good care there and they are definitely going out of their way to meet his needs. He has been there for a little over three weeks now and I think he is in a good place.

I mentioned Stratford due to having multiple family members admitted in the last few years. Their stay was less of a choice and more of a necessary transition from the hospital to skilled care. The typical struggles financially and emotionally applied so I feel the need to mention much more than that is not necessary.I am a pharmacy tech. where I do not deal directly with patients. This is unrelated to the family members previous situations. The phone calls to the facilities has brought me to the realization that I would have a difficult time admitting anyone I was close to, into the average skilled or unskilled facility. The number of nurses that seem to enjoy their job and have the mindset to help people feels really low.I gather that the staff that actually want to help patients is far outnumbered by staff that could not get accepted into a higher paying tier of the profession. My visits to a few local unskilled facilities as a personal experience reinforced the idea. When patients were not doing as expected or told, the proper respect was not given to them. I attribute that to the immaturity of the fast trained staff that was typically very young and wanting to move up fast.The doctors are very good and helpful for these patients, but nurses really could use a boost in morale. I am not one to be as biased as I sound here, however the amount of med errors in the hands of a careless nurse is higher than one would think. Seeing the result of that first hand is an eye opener.

When my father had an extended hospital stay for COPD, that left him very weak, he needed an inpatient rehabilitation facility to help him get strong enough to be able to go home again. He stayed for five weeks at Stratford and was able to eventually return home. We had visited three area facilities before making our choice, and really liked Stratford Village Nursing Home, so we chose to place my father in that facility.My mother and I ate several meals there with my father, and the food was very good. The staff was friendly, even when my father got agitated and lashed out with some harsh words at times. Their response time, when my father pushed his call light, was rather slow (roughly 10 to 12 minutes each time), and the doctor was only there once a week, and doctors took turns, so the times when the doctor would be there varied, which made it very difficult to talk to the doctor if you had a question or problem, because you never knew when they would be there.Also, the doctors and the six residents took turns providing care at Stratford, so each one would have to have each patient repeat their history when they would see them on their week, because it was a different doctor almost every week, so the continuity of care was broken. I found it odd that any patient in the clinic or hospital affiliated with this nursing home would have both the resident and their supervising physician caring for the patient; whereas, at the nursing home, the resident physicians were allowed to see the patients without the supervising physician present, making one think that the nursing home patients are not as important as other patients.The staff did not bathe my father very often, and we had to request that they bathe him at least twice a week, after we found out that he had gone two weeks without a bath. The physical therapists were really good. They did a nice job in working with him and getting him strong enough to go back home to be with his family. My father did not like the fact that the social worker at the nursing home would hold meetings with him every other week and kept telling him he was depressed, when he was really just sad that he could not be home with his family. My father's mental capacity was fine, and he did fine on the all the tests for depression they would have him fill out, but the social worker still kept telling him she thought he was depressed.All in all, I still think Stratford Village was the best of the three facilities we toured and that we made the correct choice in placing him there. They did achieve the goal of getting him back home to be with our family, where he was able to stay for five more weeks until he passed away. We think the care my father received there was good care, and, we recommended it to my uncle, who is there now.
See all Nursing Home reviews (6) See fewer reviews
Get Costs

Services and Amenities of Stratford Pines Nursing and Rehabilitation Center

Other Senior Care in Midland, MI