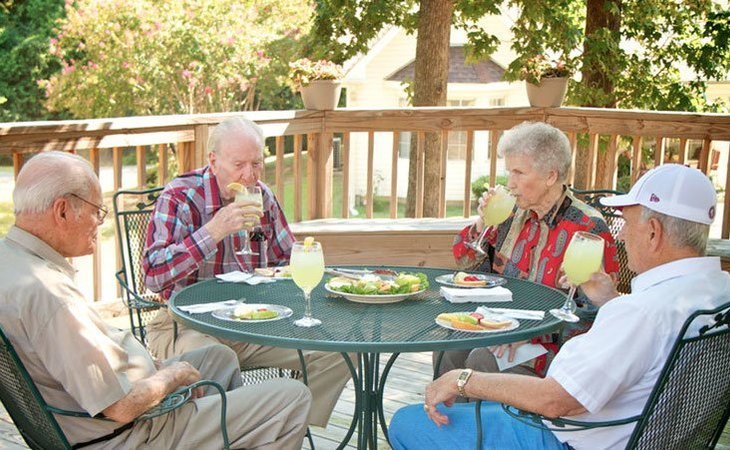 The Bungalows at Riverchase

I have moved to the Regency Retirement Village - Tuscaloosa. It's a good place to live, they take good care of you. The staff is attentive to you and they listen to you. Most of the food is good, but it's a hit or miss. We have activities and games, we've got country rides and movies. I also used to live there a year ago. They've got an activity room, it's got a nice cafeteria, and it's got a nice sitting area when you first come in.

I went to tour Martinview Assisted Living. I liked it a lot, and that was our first choice. They didn't have a lot of rooms available. It's not as fancy as some of them, but looking for my husband, I think he might have liked it better than some of the fancier ones. The lady that I was dealing with never called me back. Because I wasn't sure if I wanted my husband to go permanently or just temporarily somewhere else, and so I asked her about that, and I think that must have kind of turned her off that we might not want to stay. I like that it was nice, but it wasn't too fancy. However, as I came in the door, there was a big barrel of trash just sitting outside, that's the only thing that I noticed, and I think they were short- staffed that day. When the staff was talking with me, she had a lot of interruptions. She must wear a lot of hats, but I didn't particularly like that.

We routinely get chips and cold soggy sandwiches for dinner. Lunch is not any better! The meals are not healthy, not appetizing, and thus, we are not getting the service we pay for!!

Regency retirement is a great place for seniors they have remained covid free and have kept the people who live there happy and safe during this time of crisis.

So much love from the staff and community,, Many activities and theme'd events. They really are a family.

Regency Retirement Village - Tuscaloosa is terrible. My parents are not being taken care of, and there's a particular employee there that chooses to use the "F" word a lot. Initially, we didn't have any issues, but they've had many, many turnovers of employees including the administrative people. But since Covid, we're not allowed to visit them. My mother has to go to an occasional doctor's appointment, and when she goes, she's in quarantine for 10 days. On Sunday, her 10 days was up. They would allow you to bring things to the door. It was supposed to be where you could come now and visit, safe distance is 6 feet, but they're not allowing that to happen. I called my mother, and she said she had just thrown her dinner in the garbage. I said, "Would you like for me to bring you something hot to eat?" and she said, "Oh, please." I went and I got her food, and I told her I would bring it to the door. As I was getting it, one of the employees was very rude. She parked next to mine, and she went inside, turned around and locked the door. My mother was saying, "My daughter is bringing me food." So she came out and she knocked on my window and I said, "I'm bringing my mother's food." She went back inside, and stood at the door. I got out of the car with my mask on and the food. She opened the door and I looked in, my mother was standing there, and she said, "Give me it." I said, "That's fine, but I wanted to visually see my mother from a safe distance with my mask on, and see that she's okay because we haven't been able to enter in 9 months." That upset the employee, and she came out the door, and screamed "F you" to me. That is totally unacceptable. The two of them are in a very small room. Upon entering the facility, they appear that everything is okay, and then you learn from all the residents of the terrible food, and the terrible way that they're disrespected. My mother was asked by one of the residents to get a nurse because she had soiled herself, and she was told by that same employee to call maid service. In other words, she wasn't going to assist her. I'm gonna seek help through the Alabama Department of Mental Health, and I maybe get an attorney. There will be a pending case going forward.

The people who worked at Regency Retirement Village are really nice and helpful, and it was a nice place. The people are nice, it was clean, and the activities sound great. I have nothing negative to say about it. They have an option that I can take my loved on to the doctor or they can take her to the doctor. They serve 3 meals.

We have selected Regency Retirement Village. It’s a good facility, and it met our needs. It was affordable. The staff was very friendly.

Skyland Oaks Retirement Center had the combination of you could feel more independence, but have access to staff if you needed it. It wasn't overrun by staff, but it seemed adequate. They were unintrusive, but they were present. They were there if you needed them. The place was spacious. There were hallways, and their day rooms appeared spacious. The rooms were nice and clean, but the bathrooms could've been a little bit bigger.

Our visit with Regency was very good. It was a really nice, newer facility with a much better feel than the others I had visited. The residents were taken care of well, and we liked both the living and outdoor areas.

Regency Village was our second choice. The rooms were a little older, but they were quite sufficient, and some of them had beautiful views from the window. The staff was really nice. The thing that I liked the best was probably the staff, and I was impressed with their program, too.

My mom is a resident of this facility in the memory care unit. I have been very pleased with her care and staff are very responsive to her needs and to any concerns I have. They keep me well informed. I was a little concerned about mom having to share a room as we could not afford a private room. This has not been a problem at all. She is kept so busy and engaged that she spends little time in her room!

Regency Retirement Village (Old Montgomery Highway) was a company-owned facility. It was very nice and they were very friendly. However, it was a little farther away from me. Also my husband would have to share the room. It wasn't too big to be sharing. There wouldn't be much of a room for my husband in it and it would cost the same as what I'm paying at the other facility. Also if I want to have nursing services for him, that would be $250 extra. If I want them to do his laundry, it would also cost me some more. However, all the residents there seemed happy that they live there. They have a lot of activity rooms and they have different things to entertain them. Overall, it was a very nice place and I wish I could afford it for my husband.
See all Assisted Living reviews (13) See fewer reviews

Regency Retirement Village was very nice and they were very helpful. It had a friendly atmosphere. It was very clean, they were very accommodating, and they were willing to work with my parents any which way they could. The cottage was nice, a good size, very clean, neat, and ideal for them. They offer three meals a day and snacks. They have someone who can clean the house and someone who will take them to the doctors, and they have a nurse on-staff all the time. I would live there myself if I could.

My husband went to Regency Retirement Village of Tuscaloosa for a few days, but he's diabetic and has trouble with his sugar. I think he didn't like being there, and so his sugar ran high the whole time he was there. He was in the memory care part. It was all right. Our issues were with his blood sugar. I did see them eating some of their meals and they seemed to be very good. Well, they were trying to say that my husband was drinking soft drinks and that was running sugar, which I don't believe at all, so I don't think they were knowledgeable about that. There was a very nice lady that showed us around. His room was nice; it was just a bedroom and a bath. It was about comparable to any of the others. I didn't see any issues with maintenance. The thing about Regency that was kind of odd is that their memory care is on the second floor, and you have to have a code to get on the elevator. It was just a little unusual. The dining room was not particularly fancy, but very nice and clean. They have a bus, and they would assist the residents in getting to doctor's appointments.

My mother-in-law was at Regency Retirement Village - Tuscaloosa for a little while and we took her out of there. The memory care upstairs was horrible. It's unbelievable how bad it is. She was placed in the memory care section and she was assigned a roommate who constantly packed up her clothes and my mother-in-law's clothes and told them that they were going home. This was constant two to three times a day, and they wouldn't change roommates or take that other roommate out. It made my mother-in-law very upset constantly because she thought she was going home. The staff all sat around talking to each other in the daycare area. She was in the hospital with C. diff twice. I tried to explain to them that C. diff when it contaminates the mattress, you will constantly get it back, and they wouldn't listen to me about that. We just had to take her out of there the second time she got home from the hospital. She stayed in the memory care section for a few months. The people in the assisted living downstairs looked clean and happy, but upstairs I wouldn't say they were clean and happy at all. The building looked nice from the outside. They were doing a few things upstairs, but not much. They mostly just sat around upstairs in the dayroom, and they would give them something to drink and snack on every once in a while. Their food was served on school trays and they would have food put on around each little section of it, but it looked OK to me. We were not getting what we paid for.
Get Costs

Other Senior Care in Tuscaloosa, AL