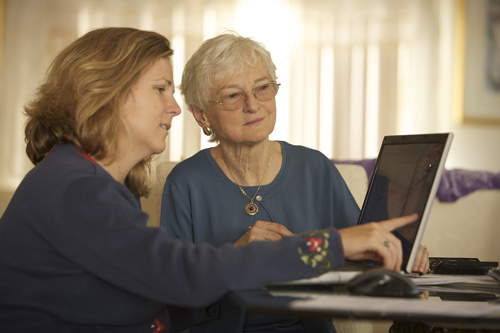 I'm seriously contemplating that move to Mayslake Village if I can get in because it's within the money that I can afford. I got to the point where they showed me the apartment, where I would be, and all of that. It was very well done. I took a tour of the whole complex. Some of it was good and some of it was a little bit further away and I wouldn't be wanting to do that. It had different types of living quarters. I've been there a few times now, and I finally have found something that I think will work. It's just a matter of getting on a list and going through the procedure. I talked to the president there, but I didn't go through a whole layout of staff people. It was very well put together and the gentleman that took the tour through the apartment and everything was very well aware of everything. You could ask questions and he had answers. It was very well done. I was not able to go to the dining room because of COVID, but it was a very nice place. I just could not move when they were wanting me to.

When we visited a relative at Mayslake recently: 1) We heard & reported automatic gunfire, 2) smelled something decaying from a few of the apartments (nothing has been done about this, same smell, same location 2wks later)! Someone was moving in while we were there. They were holding the elevator & not allowing anyone else to use it (why no utility/moving elevators)? The kitchen appliances, cabinets, vinyl flooring and carpeting are builder basics! Lighting, flooring, and kitchen layouts are not “senior friendly!” Oven temp off by 75•f. Need: extra lighting in the kitchen, closed burner cooktop, refrigerator with temp reading, under counter lighting in bathroom, shower only option in bathroom, vent in trash room door, more frequently changed HVAC filters, Wellness checks (especially when the smell of sewage and decay are wafting into the hall), and clear signage when a fire drill is taking place!

Mayslake Village is a huge complex, and it has a lot of different services and social workers on site. They said they have people come in for eye exams, dentistry, and everything else. They've got a complete facility, and the rooms are small. The whole apartment I'm moving into is only 550 square feet, but it's very well-maintained. It takes a block to get anywhere, so if you can't walk around, you're in big trouble. They have activities rooms and a social room where you could have parties. They also have exercise classes, and the staff seemed very nice and helpful. The dining area is nice and big.

I'm on a waiting list at Mayslake. I got a good impression during the visit. The rooms were fine, fairly roomy, and would do just fine for me. We got a brochure of activities they have during the week, wherein they go on trips and to the movies. The grounds seemed to be very nice and well cared for. The price was really reasonable. However, there's a fairly long one- to two-year waiting list.

Mayslake Village had a certain salary to qualify, but I was not really thrilled with what I had seen. The rooms looked small. One was in the main building and the other one was called The Villas. You had to go outside for everything unless you were in the main building. The staff was wonderful and very helpful. They had a whole list of activities that they gave me for the week. On Mondays, they had some program about banks; I supposed people would come in and try to get people to use their bank. Then there was the cast and crew clubs and current events. Every day they had something. There was a waiting list for the larger rooms, but the waiting list was very long.

I've gone to see Mayslake in Oak Brook. They seemed to be a fit for me, and I can afford to pay there. We went there on a Tuesday, and I filled out an application for what they call the Villas. They seem to be something that I could go into right away because they're open right now. However, they were a little too small, but everyone involved in showing us around were very kind and very friendly. The CEO talked to us, and he was very explicit in what they had and how proud he was of the whole area. It was begun by the Franciscans, and they have a beautiful chapel. The dining room was really very pretty; it almost looked like a restaurant. We looked into the cafeteria-like area where they would have hot tables and stuff -- and there wasn't anything in there when we went by because it was around 8:30 a.m. -- but it looked very efficient and very clean. The whole place was amazing. The only thing I was a little disappointed in was we were there on a day that was very rainy, and it made a lot of the wooden walkways and stuff almost unattended to. My daughter-in-law says, "How often do they clean all this up?" The balconies and the villas were exposed to the air on all weather and everything. There were only two-story buildings, and they were all connected; it's quite a complex. We had to walk by a raised floor, but when we got there, we were able to just walk in and take a good look at everything. It was not as roomy as I would like, but for the money, it wasn't too bad. I think it was $669 a month. It looked like they've been rehabbing the whole thing. Because it's HUD, they're getting their money from the government, so they're waiting for a $12 million thing to finish up whatever they have to rehab and things like that. They do have an area called the Cloisters, which you have to really have enough money to get in there because it's luxury town houses. The rest of the building are what they called mid-rise apartment buildings that are all one-bedroom apartments, and they come with a shelf refrigerator, two ceiling fans, it's all electric, and the utilities are paid. They have Comcast there that you can sign up for $33 a month, and you pay your own phone. You have to pay a meal ticket of $65 a month and you can use that for one meal a day or they have like a grocery there too and you can use that for the groceries. So, I really liked it there. I wish I could have had someplace with two bedrooms because I'm coming out of a three-bedroom, two-bath house. I wasn't really that crazy about the Villas because it was extremely small and I want a bigger kitchen; it was like a galley kitchen, and I wanted something a little bigger. I said, "Should I come for the interview anyway?" And she said, "Of course because now you'll be in the system and if you turn down the Villas, they'll ask you what you want," and then I'll find out how long the wait is, which is generally from one to two years, so I'm willing to wait.

My 73 year old mother moved to Mayslake a year after my father passed away. She moved from a 3 bedroom single family home. The Villas was a perfect transition with parking at her back door and an area to garden. We chose it together but she initially resisted since our first visit was in icy January and she could not see past the misery of winter. Even on my initial visit I noticed the residents here are HAPPY and they have something to do every day. Even if it's just getting dressed and going to the dining area for coffee.This is independent living at its best. She's been here over a year now and every time I have stopped by she's doing something other than waiting for me!

I visited Mayslake Village. It is a beautiful place. Some of my mother's friends have moved in there. It is a huge complex, and they have all kinds of things for the people to do. The rooms were very nice. They're like regular little apartments. I had a dinner there a couple of times, and the food was very good. Regarding the staff, they bend over backwards to help people. They're very attentive and very good people. As for activities, they have big sales, they have different parties, and they have bingo, movies, and trips of all kinds. They have shopping several times a week. They also have religious services. They're always busy. I know a couple of people that are there right now, and they're always busy. I think it is an excellent place for seniors. What stood out for me is how clean it was and how well kept it was. I think it is excellent. It was a wonderful place.

Mayslake Village is a very well-liked place. They usually have a waiting list for people to get into there. I have patients who come and go from Mayslake, and they are all very pleased. The meal service gives them more option. I have not heard anything negative at all about the place. It is quite nice. They have a beautiful lawn, and it is also very well kept.

She liked Mayslake Village. It seemed very nice and clean.

Mayslake Village looked clean and nice and homey. There’s more than one building. My cousin and some of the residents I saw there were happy. I know they have buses that take their residents to the store, and I think they have their own doctors there too.
See all Independent Living reviews (11) See fewer reviews
Get Costs