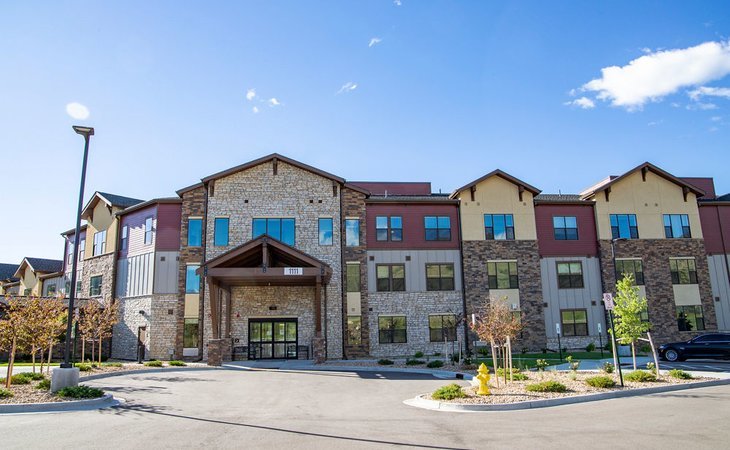 We have chosen Golden Lodge Assisted Living & Memory Care. It looked like the best place. We've only got to see a couple of places, but this was very convenient to where we are, and it seemed to have the things we needed. It's brand new, so that's very nice. The people were nice that we spoke with, obviously, and they answered the questions we had. One of the ladies asked if we wanted to come over for a meal one day, and we did. We went over and they were very good. We had a very nice lunch. It was very good. I hope they can keep that chef around for a while because he was very good. We didn't see anybody in the activities. The tour was scheduled at about 9:00 in the morning and it looked like the place was practically deserted. It's not full because it's brand new. It just opened after COVID. We visited the assisted living, but I wanted to make sure that they did have memory care attached to it so that, if and when my husband reaches that point, it's just a move down the hall, and that was a big-ticket item for me. The views are beautiful in the public areas.

I toured the Golden Lodge, I looked at the rooms, and went over different billing questions. I fell in love with it, I really liked it. It was comfortable, the rooms were good, and it had everything I needed. I was very happy with the staff. They were friendly and nice. They explained everything. They were sure about what they all do.

Beautiful brand new community. Gorgeous view and grounds. Feels like it will be totally safe even with the Coronavirus. They are following all guidelines and everything is new and antiseptic!

Mtn Kathy, Thank you for your great review! We are very proud of Golden Lodge Assisted Living & Memory Care. We have the most majestic views of the mountains from every window. It is very scenic and peaceful. Our team is wonderful. We are focused on providing high quality care. We are diligently following all federal, state and local government health care guidelines. We are Covid-19 free! Please let us know if you or a loved one has any questions. We are here to help! Thanks again and we look forward to spreading the great news about our brand new home, Golden Lodge Assisted Living and Memory Care.

I actually like Golden Lodge Assisted Living and Memory Care. I took the full tour, and I spoke with a number of the staff members, as well as the marketing person. I went through their memory care facility. In the memory care facility, they have neighborhoods that are organized around six shared rooms per neighborhood. In each neighborhood, they had three assigned caregivers during the day (at night, they reduce that to two). I visited assisted living, but I went ahead and went through the memory care too. The only real difference is that that the neighborhood doors were alarmed, and in the memory care, their garden was separate and enclosed (so that there was no possible way anybody could wander off). Basically, it's brand new. I watched them build because I drive passed there twice a day. In each of the neighborhoods, they had a small kitchenette area that basically had facilities to reheat food. They had their own refrigerator and such. They did not have cooktop surfaces. With the memory care, they shouldn't need them because all of their food was brought in and provided for them. Their food was really good. They had bacon, eggs, toast, and cereal. They have a dietician on staff that each patient has a listing of what they're allowed, and what they're not based on their health. The dietician did the whole facility. Basically, on the door to everybody's room and also on a notebook at the dining area, they had the people's names as well as what they should and shouldn't eat. I give top marks for organization on that place. It was really nice. Each neighborhood had an activity area and a couple of couches/chairs for people to sit around to watch TV. They had several bookcases full of books for people to read. They had a series of board games and such. They had basically anything you might want. If I was coming in to visit my mother, there was stuff there to do with her. In the memory care, there was room for 12 residents in each neighborhood; that way they wouldn't have a series of strangers coming in. Also in the memory care, the same staff worked in that same neighborhood. They didn't swap around which neighborhoods they worked in with. With dementia, it's very important to have stability with people and things, so that they don't get confused. In the assisted living, the staff would trade around some more; their staffing levels were slightly less there. They had two during the day and one at night, but they could call additional help if they needed it from one of the other neighborhoods. Same thing with the with the memory care; they could call additional if needed. All of the residents were given pendants to wear. The staff made certain that those pendants were charged and tested on a weekly basis. If the person went anywhere and fell, they got an alarm at a mainboard, somebody went and found them. They helped them with whatever they needed. There was no chance at either place of somebody falling and laying there for hours. At most somebody might fall and lay there for five to 10 minutes, while they rolled out whatever they needed to pick them up. At the Golden Lodge, they actually offered three things: a pendant, a watch, or a brooch that clips to your clothing. It is whichever you were most comfortable with. I was very impressed with the Golden Lodge. If my mother had needed assisted living versus a higher lever of care, I probably would have put her in Golden Lodge because the care was equal to the other facility, but it was closer for me to visit. I like everything about them.

I like the setup of Golden Lodge Assisted Living & Memory Care. They don't have too-long hallways, and they have an on-staff physical therapist. Since it's new, when my father-in-law joins them, there will only be eight people in memory care, and that's a good way to start. The staff who gave the tour was delightful and knowledgeable. Of all the places I looked at, their rooms have the right size and the right setup for what I think memory care should be. The furniture is also very simple and very minimal, which I believe is important. At better times when it's not COVID, they take the residents out. The dining area is very nice, clean, and open, too.

We chose Golden Lodge Assisted Living & Memory Care for my mother because it's brand new, no one has lived in it yet, and because of its proximity to family members. We can still go there, visit, and take care of her. The studios are really spacious. The staff member was accommodating and kind. I haven't had any complaints.
Get Costs 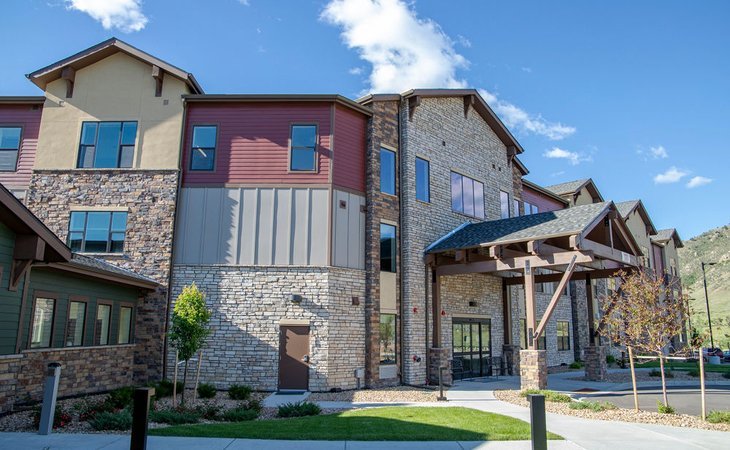 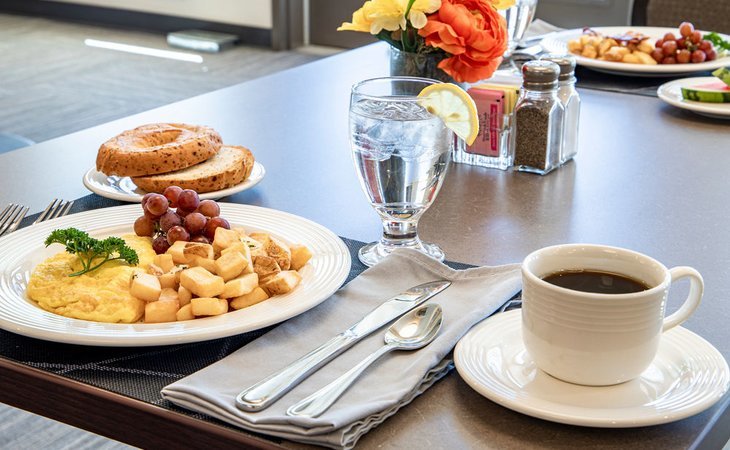 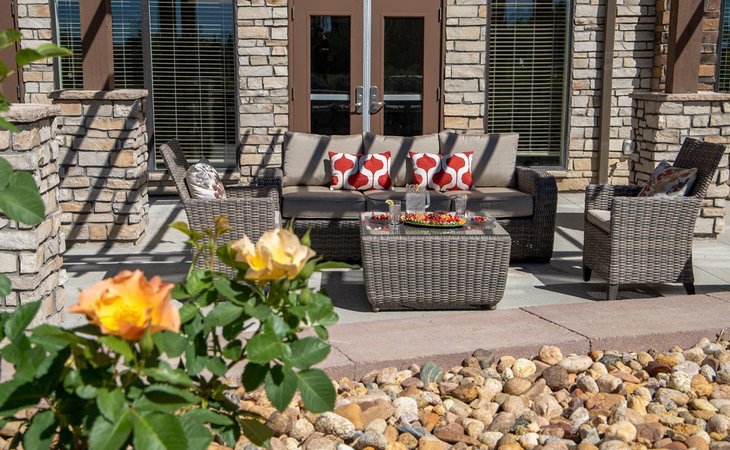 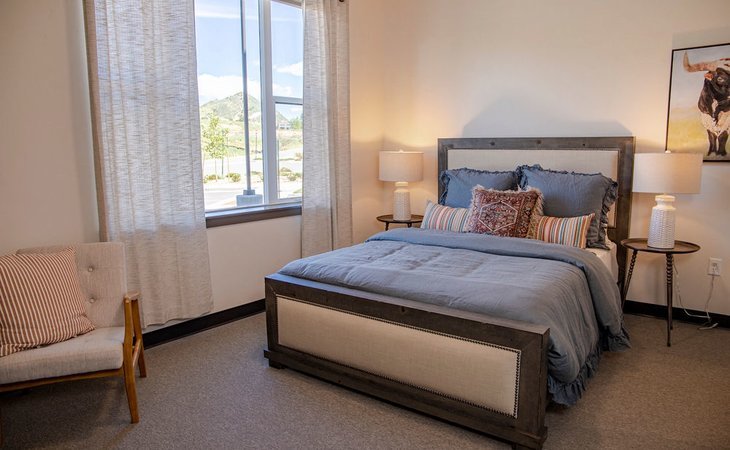 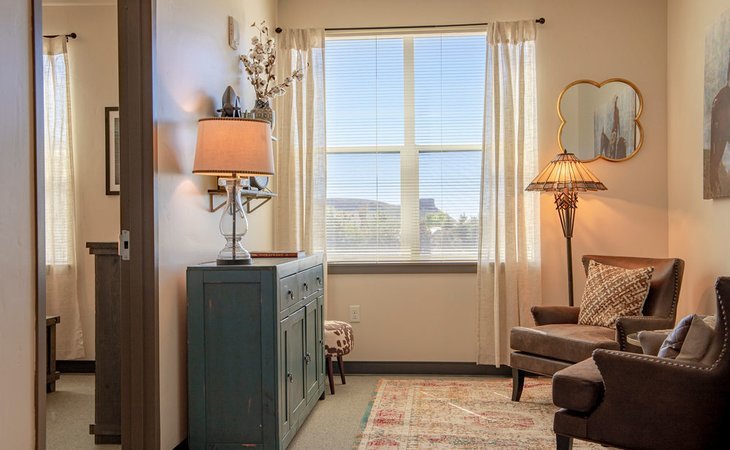 Golden Lodge is Golden’s newest senior living community offering assisted living and memory care services. We support a resident-first environment with intimate living options. Only thirty minutes from downtown Denver, Golden Lodge is located in Golden, Colorado, and nestled near the foothills of the Rocky Mountains, offering our residents and guests incredible views of the surrounding areas. Our senior care team at Golden Lodge Assisted Living and Memory Care would love to learn more about you and your loved one.

Our services and amenities include:

At Golden Lodge, our whole-body wellness approach supports body, mind and spirit, focusing on wellness. Our specially-trained and nurturing team members create an authentic home for those who are no longer able to live on their own and provide ample opportunities for continued growth and development. Our dedicated senior care team values each resident and receives specialized training to discover each individual’s history, interests, preferences and needs. We work with the resident and their family to create an individualized care plan prior to move-in.

Our memory care services include all of the assisted living amenities plus additional safety enhancements:

We take pride in providing high-quality care and amenities that create a comfortable living environment that is intimate enough to feel like home yet varied enough for a range of preferences. Our community delivers programs and activities that engage all areas of wellness – social, emotional, intellectual, spiritual, and physical – to create a fulfilling lifestyle. Our goal is to enhance the lives of those 55-plus with exceptional programs, services, and amenities in one of Colorado’s most picturesque settings.

Other Senior Care in Golden, CO