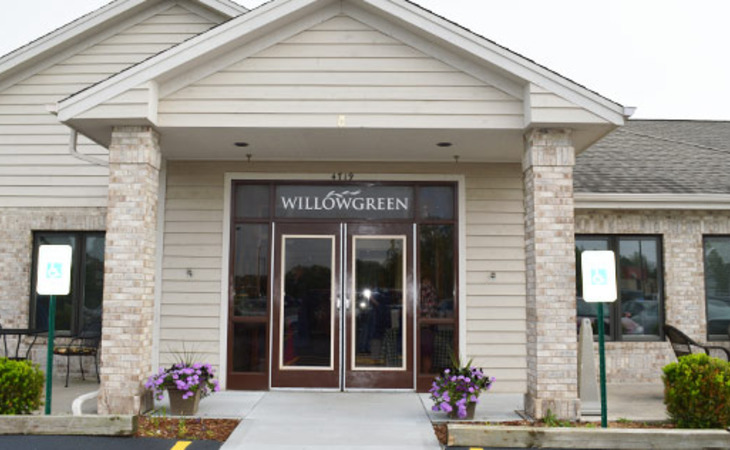 Thank you to the loving Willowgreen staff for caring for our family and going the extra mile. Getting information about care that is specific and meaningful is often very difficult. We are so happy with the way that you helped us to know what to do through every step of the process. I would recommend you guys to anyone - and have already started to do that. Thank you again....we are very grateful.

A close relative of mine was a resident at Willowgreen in Caledonia, WI. In general, the Willowgreen facility is clean, it does not smell, and has an unfriendly staff. Appearances are important and Willowgreen ensures the first impressions are good. If you are at Willowgreen for a 30 minute visit or tour, you will miss much that is going on. The facility has three caregivers on the first two shifts and two caregivers on one shift. One would expect that with three caregivers the residents would be given good care and have daily activities. This is not the case. One caregiver is devoted to meal preparation and cleanup. One caregiver is doing laundry, cleaning rooms or bathing residents. This leaves one caregiver to attend to over 20 residents. Except for the caregiver on meal preparation duty, the other two caregivers assist in serving or feeding the residents at mealtimes. Since we live out of town, our visits to my relative were three to four hours. We arrived just before the noon meal and ate in the dining room with the other residents either at my relative’s table or on a nearby sofa. The dining room and living room were a combined open area. The meals served were not appetizing. One meal was Swedish meatballs with noodles and mashed potatoes. A resident at my relative’s table told us that the menu for that meal was prepared by a dietician. No vegetable or salad was served. On another occasion we asked a caregiver if the residents ever get a salad. The caregiver replied “sometimes”. An issue arose where the residents were not getting enough liquids. Instead of ensuring the residents had water throughout the day, the Willowgreen solution was to give the residents 12 oz. glass of ice water, in addition to juice and coffee served during lunch. Our observation, on three separate visits, was that the residents would take a few sips of water and then ignore it. The managers at the time of my relative’s stay at Willowgreen interacted with residents as little as possible. They would stay in their office with the door closed sending the message that they did not want to talk to the residents. They would appear at the noon meal to observe the staff serving the meal but did not pitch in to help, so that the residents received a hot meal and not a lukewarm meal. In general, none of these facilities are good. If you can keep your loved one in their home by all means do so. No resident appeared happy at Willowgreen. Be sure to read the notices when you visit these facilities, especially their violations.

A very close relative of mine lived at Frontida’s Willowgreen Home in Caledonia, WI, for several months. My initial impression when we walked into the facility was the unfriendliness of the staff. At first, the new owner and managers appeared caring and concerned but that quickly changed, and we observed that the day-to-day care of the residents was minimal. When my relative moved into this facility, there was a nurse present five days a week, but when the new owners arrived in October 2013, they eliminated one of the nurses, leaving a nurse there only two days a week. During visits, we noticed that the residents were not engaged in any meaningful type of activity or interaction during the day and would either sit in front of a TV in a small living room area or be asleep in their rooms. When we dined with my relative on several occasions, we observed some of the unappetizing meals that were served. Large glasses of water were provided with the meals, but the residents barely drank them. After eating, the residents would either return to their rooms for a nap or sit in front of the TV once again. On rare occasions, they would play Bingo in the dining room. No snacks were offered to the residents in between meals. All of the senior staff, some of whom had worked at the facility under the prior owner for 14 plus years, were fired, quit, or walked off the job and confided that they were unhappy with the new owners and their management. Even with the new staff, the turnover was constant. The senior staff’s replacements were young and inexperienced. Some of them seemed caring but were overwhelmed and just not qualified to handle all of the residents’ varied needs. There were three caregivers per shift, and they were required to cook, hand feed a number of the residents, wash dishes, do laundry, clean, administer medications, in addition to providing direct care for over 20 residents. During our visits, the house manager and assistant remained in their office and did not interact with the staff or residents. Their primary source of communication with the staff was through written logs. On weekends, there was no manager present in the facility. While my relative lived in this facility, on several occasions, no one called her doctor or notified the family when she required medical attention. It was always a family member that discovered something wasn’t quite right with her during a visit, and we had to contact her doctor ourselves. This situation would be especially difficult for families living outside of the area. On many occasions, the managers did not bother to return the family’s phone calls concerning our relative or follow through on their word. It was disconcerting and did not create trust or peace of mind. In addition, we witnessed that not everyone was treated in the same manner there. The management appeared to show favoritism towards certain staff members and residents. Many of the residents experienced falls and personal injuries at this facility. We noticed a resident with terrible bruises on her forehead, face, and arm as the result of a fall. My relative fell several times during her time at this facility and never had a history of falls prior to moving there. When the family learned of the falls, several different versions of the incident were always told. This facility is owned and operated by a growing corporation whose marketing tactics and outward perceptions can be deceiving. All of their promises are, of course, subject to change after your loved one settles in. The most important thing when searching for a facility is to look beneath the surface and focus on their record, the quality of care actually provided, and the sincerity and honesty of the management and staff. Based on our first-hand experience with this facility, I wholeheartedly do not recommend it.

This is a really super nice facility. WIth some places, the outside is nice but the inside doesn't meet up with the outside. At Willowgreen the owner is actually available and cares about residents and families. That is awesome. I definitely give Willowgreen the very highest recommendation.

We visited Willowgreen while in the region looking at facilities in Racine for our uncle. The outer exterior appeared well maintained, as did the grounds with nice searing areas and tree-lined walkways. The community rooms were clean, nicely decorated and easy access for residents. They also had private dining and meeting rooms for parties that could be reserved. The seniors participate in many stimulating activities. From the library to card games and physical exercise - the seniors didn't look bored and appeared to be very content. The staff interacted well with everyone. The fitness rooms were impressive, with regular exercise classes, including personal trainers to ensure safety while assisting the seniors in every way they can. The dining room was quite nice, with plenty of space. The food we saw looked and smelled delicious. The menus all had healthy food options for all kinds of diets. Healthy snacks are offered all day and into the evening, as well as whenever residents request them. The outside activities feature many interesting cultural events in Racine -- which hosts many exciting music and art gatherings. There was also a large auditorium on-site for interesting group events. This facility can accommodate varied levels of ambulation and they can easily switch care to more or less needed as is appropriate for the circumstances of each resident. The living spaces were nicely designed and generous with space. All were full of light and air and nicely decorated with individual style. This facility is very well organized and designed for the comfort of its residents. The staff is competent and very caring, as they see to all of the needs of the seniors.
See all Assisted Living reviews (5) See fewer reviews
Get Costs

Caring for someone with depression, bi-polar disorder, or anxiety can be difficult. Frontida caregivers are a consistent support to our residents who need routine meals, on-time medications, housekeeping, and daily monitoring in order to help them remain stable and healthy, both mentally and physically. Willowgreen Home in Racine offers:

Frontida's Willowgreen Home is a small, privately owned community whose mission is to Build Trust. Our values of Work Hard, Follow the Rules, Tell the Truth and Have Fun are more than words on a wall, they are our way of life.

Other Senior Care in Racine, WI