Touchmark At All Saints 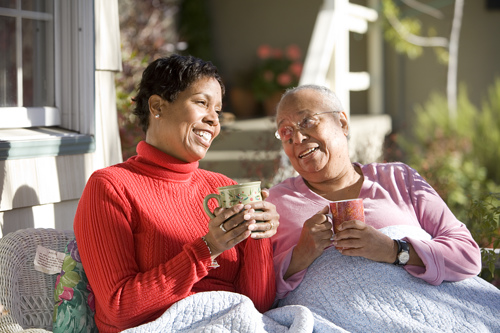 The Inn on Westport

Reviews of Touchmark At All Saints

Assisted Living Reviews for Touchmark At All Saints

My aunt called two weeks ago and told me and many of her nieces and nephews that she needed help moving to a new assisted living home in Sioux Falls. So this past weekend myself and three of my cousins each rented moving vans and drove to Pierre, SD to move her to Sioux Falls. Upon arriving at Touchmark, I was surprised at the posh look it had. It is a gorgeous look facility that could easily pass as a nice hotel to anyone passing by. As we went inside and began moving my Aunt's things into her room and the storage area I was continually surprised by the level of decor and attention to detail. I don't know all of the amenities, but from what I heard my Aunt say many of them are similar to what I have seen at good facilities elsewhere: nursing care, transportation and overall wellness/fitness programs. They have guest rooms, but we didn't stay in them. While I didn't look around much, I didn't see many residents who weren't doing something, either games, crafts or just talking. The facility seemed very nice, and I know my Aunt did her research before deciding on it, so she must have seen or heard many things she liked.

Independent Living Reviews for Touchmark At All Saints

We did a tour of Touchmark at All Saints. It is a very attractive, clean, comfortable, and pleasant facility. They got all of the points that we were looking for with one exception. They did not have the Parkinson's program that other facility had had. My sister felt it was too large. The fact that the other place was much smaller appealed to her because it seemed to be less institutionalized. The staff was very friendly. They invited us (the four of our sisters) to have lunch there at the Touchmark. Lunch was delicious. We met a number of their management staff while we were having lunch, and they were all very informative and very pleasant. We concentrated more on the apartments themselves, so we didn't really see all that much of the activities. The rooms were very pleasant and certainly well-designed. They had remodeled a number of them, and those were the ones we looked at. There were some older that had not been renovated. The 1-bedrooms that we were looking at were very spacious and convenient. The entire facility was striking in its cleanliness and maintenance. We did see a chapel. There was renovation over the area near the dining room, so it was a little on the noisy side. The building itself was quite old, beautifully maintained, and very clean. It has been very well kept.

Memory Care Reviews for Touchmark At All Saints

My dad is in memory care and was often unkept, with a dirty room. I complained and only because I got Hospice nurses that he got better care. To even get in there I paid room deposit, but also a $2,000 NON-REFUNDABLE fee. "if you pay first, you get the room" I was told. In the beginning of our stay, they ran out of his medication several times. I was told to supply toilet paper and snacks. Everybody will get a diaper automatically, not only because of incontinence, but one worker can't possibly care for 12-13 people at once and get to them in time. Laundry had been lost, two cell phones washed and ruined, other people's laundry mixed in, urine stains around the toilet for a couple months, even their social worker took a picture in disgust. Vomit on the carpet that I asked to clean up and was told the only thing available was a broom and it took a week to clean up! Shouldn't there be a locked closet with cleaning supplies? I've visited when there has been one nurse, or NOBODY! I do my dad's laundry now, bring sanitizing wipes and some days care for him. The fees only went up, but hiring staff that stays, is not happening, because administrators refuse to pay a living wage to the care givers. We had a meeting and administrators wouldn't listen to any suggestions of offering daycare, or of paying staff more. It was clear they didn't want to hear my complaints and didn't care. In an email, they said they pay the going rate, but staff is leaving, because fast food pays better. They don't care how the staff feels and won't be kind to those that speak up, so those don't last long. They spent on new carpet and furniture for assisted living, but nothing in memory care, where STAFF is needed. They don't offer snacks and coffee in the afternoon, because it's work, so when I bring cookies, residents run to me for a cookie. So sad! My dad has to have shredded food, because he chokes and one day, because he wasn't given a knife, I walked in and saw him trying to chew up a whole chicken breast. Once, he choked and the nurse aide ran to "get help", so I gave him the Heimlich myself. Isn't everyone trained? I have to do dad's laundry, make his bed (they lost some sheets), sometimes change him. Our rates only go up. Other family members are also disgusted and one told me they go daily to make sure "nobody gets hurt". My dad seemed to be falling in evenings many times and many falls were uncharted, or reported to me. I decided to check in on evenings. I have found my dad locked in his room at night . . . all rooms were locked and residents told me nobody was around. I walked to another wing to ask someone to let me in and I stayed with my dad 2 hours and nobody checked on him. I have found him laying on the plastic mattress cover, with just a throw blanket on, because they didn't make his bed and clean sheets were sitting on his chair. I've brought bedding from home, but they lost two sets of bedding. Some of these nurses don't even get a break if they are the only one working. Some nights, the social worker stays to help with patient care, but is she trained for that? Parking is horrible! hardly any visitor parking and if you have to do laundry, who wants to walk up that hill half a block?! One Christmas, they sent a letter, asking we tip up to $3,000 to give staff, but I knew they wouldn't give it to the staff. I suggest you give those gift cards out to staff, or administrators will use them how THEY see fit. One family member gave gift cards for staff, but the staff never saw them! My dad constantly tells me to get him out of there and I don't see spending the price of 10 mortgages, when I can buy a bigger home and pay nurses almost double what TouchMark pays, saving my dad half what TouchMark takes. I am getting my dad out and bringing him home, where one nurse will care for just him. I will be right there if he needs me and won't have to run across town to check on him. I do feel bad for the other residents, especially because some have children that can't check on them regularly.
Get Costs

Services and Amenities of Touchmark At All Saints

About Touchmark At All Saints

Map of Touchmark At All Saints