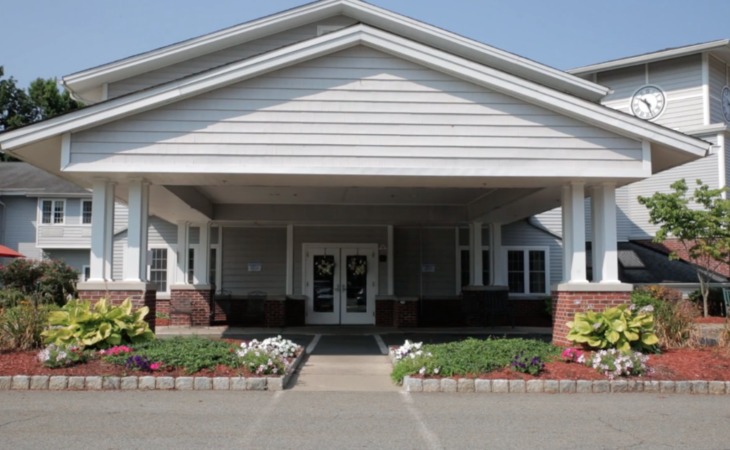 Reviews of CareOne at Wayne

CareOne at Wayne was too large. I didn't really care for the size of the place, and that's really what it boils down to. Nothing stood out. The staff who assisted me was fine. It was satisfactory. He answered all my questions. The overall condition was OK, but the gentleman told me that the rooms were being renovated. There was an activity room that we looked at. There was an entertainer that was singing a couple of songs, and the residents were singing up.

Though Care One at Wayne was an adequate facility for my grandfather’s recovery, their handling of the Covid-19 crisis was absolutely unacceptable. Two weeks into my grandfather’s stay, they began barring visitors from entering the facility, which they did act early on, but on FaceTime calls with my grandfather it was obvious that social distancing practices were NOT taking place within the facility. The physical therapists who assisted in the FaceTime calls were within inches of his face, wearing NO masks. Who knows where employees go after work, what family members they come in contact with, and what they may be carrying. Temperature checks may be effective for symptomatic carriers, but with a long incubation period for presenting symptoms and asymptomatic transmission, it is useless. Not until the last week of March did employees become mandated to wear face masks and PPE. (Side Note: During a FaceTime call, the PT who was managing the call for my grandfather was wearing a mask but sneezed centimeters away from his face and did not bother to move away nor cover her mouth additionally.) We relentlessly brought up our concerns to the social worker, Jennifer, and other staff members as cases in nursing homes and long term care facilities rose in the state. We were constantly reassured that the facility was ‘air-tight’ and taking all necessary precautions. Speaking with another employee, we were also told that there would be no new admissions of patients to further prevent bringing the virus in. When cases grew dramatically, we moved to get him discharged, but were met with resistance from the staff even though he was cleared to leave within a few days. He was in perfect health and had no reason to be there, besides his own willingness, and potentially be exposed to the Coronavirus. The additional time that he was to spend in the facility was by his own choice of extension and not necessarily recommended by the health professionals or mandatory. He simply enjoyed the friendly staff and had good insurance that would cover it. In my opinion, patients were overly comforted about the risks of contracting Covid-19 in their “safe little bubble”. As Gov. Andrew Cuomo said, ‘it only takes one ember to start a wildfire’, and one ember it did. On April 2nd, our worst fears were confirmed when we received a call from Care One alerting us that there was a positive case of Covid-19. We were told that the positive patient had been brought in from the hospital days earlier with an already suspected case of the virus. Why would a long term care facility, already vulnerable, accept a symptomatic and presumed case of Coronavirus? This was entirely shocking as we were assured no new patients were being admitted from the hospital. Staff informed us that this patient was being isolated and on the opposite side of the facility that my grandpa was on and that any potential outbreak was under control. At this point, it was absolutely necessary for my grandfather to return home, even though employees had told us that they felt ‘at ease’ with the situation. During the discharge process, we asked the social worker to be informed of any outbreak arising in the 14 days following his departure to help us better monitor him and assess the level of isolation he’d need when returning home. She said she would and made note of it, but never did. We thought maybe it was a good sign until the New Jersey Department of Health released the numbers for infections and deaths at every long term care facility in the state. We were appalled to learn that Care One at Wayne had 12 cases, and as of writing this their total is 30 cases and 5 deaths, likely not including employees or those patients who were discharged amid the outbreak. It is absolutely disgusting that within the 14 days of my grandfather’s discharge he was not notified of any outbreaks to take further precautions with his health. He did receive a strange phone call, in which a staff member questioned him on his health a little over a week after his departure. He is 91 and lives with his elderly wife, who could have also been put at risk. For a healthcare facility to sweep cases under the rug and hide it from patients and family members is irresponsible and could prove fatal. This is exactly the type of behavior from these types of facilities that led the Department of Health to publish every case and death in long term care. Trying to hide and diminish infectious outbreaks to avoid negative publicity does exactly the opposite. Grocery stores, including local Trader Joe’s and ShopRite’s, have done more to notify customers of possible contact with positive employees and shoppers than Care One at Wayne, a healthcare facility did. Just to make this clear, the issue is not that Care One at Wayne contracted and had an outbreak of the virus, as no facility is immune. It was inevitable. Instead, the issue lies with informing patients and their families about possible risks to their health during a global pandemic. The 14 days following possible exposure are CRUCIAL and to go into it blind, especially at the age of 91, is reckless on part of the facility. The patients they care for are part of the most vulnerable population and the utmost diligence should be performed when caring for them. If there was exposure to a possibly fatal illness while a patient resided within the facility and they are still within the incubation period of contraction from when an outbreak or community transmission occurred, they SHOULD be notified and followed-up with.

CareOne at Wayne seemed nice enough, but all of their walls were painted gray, so it seemed a rather cold place as opposed to warmer, whiter, cream colors. The temperature was warm but the gray walls were not as nice. It's more industrial, like a university building, so I didn't like it as much. The rooms were OK and again, kind of gray. The staff was wonderful.

I had an elderly family member there for about a year, first in respite care then as a resident. The facility is nice and clean. The food is good although at times seems to be made up of extras from prior days. The nurses and dining room staff were first rate. There are a few areas of concern to be aware of: -There is not a doctor in residence. There is one on call, but not always available. -Within the year there were 3 different facility managers. -The residents have assigned seats in the dining room. If lucky enough be be at a good table you'll enjoy your meals. If with non-verbal residents, not very inviting. -The nursing assistants are a mixed bag at best. A few are very good and kind to residents. Several are rude and lazy who are not happy when called for help. -Residents are supposed to be helped with showers twice per week. That does not consistently occur. -Do not leave food or any variables visible to others. They will walk. In summary, compared to horror stories you may read about elder care facilities, this may be a major improvement, but do be aware of the concerns noted above.

CareOne at Wayne was not a place that I would like to live in, but it was adequate, and it would be comfortable for those who were interested in that kind of place. It was clean and up-to-date. The person who assisted me did a good job in discussing the package. The room that I saw looked adequate in size.

CareOne at Wayne was a clean, nice, well-organized facility that had everything you needed. The rooms were nice and roomy. They had single and two-person rooms with a kitchenette area. The price was very comparable. I liked its location.

My mother was here for Rehab recently. It was TERRIBLE! The staff walks around miserable, the food is not good and there is a dining room but not open, you have to eat in your room for ALL meals.. The nurses seemed annoyed when asked for something and took, and took a long time to answer my mothers call bell. It is also old looking and somewhat depressing. I took her home earlier than expected with home care, which worked out much better for both of us.

I have been into CareOne at Wayne. I have seen that most of the people there were in a wheelchair. I also noticed that the rooms were too small. They do have a wonderful dining area with high ceilings and deep windows. The staff provided good service too. They even offered lunch during my visit. They also had a lot of activities in there for the residents. I think everything was excellent.
See all Assisted Living reviews (8) See fewer reviews
Get Costs

Costs for CareOne at Wayne

Photos of CareOne at Wayne 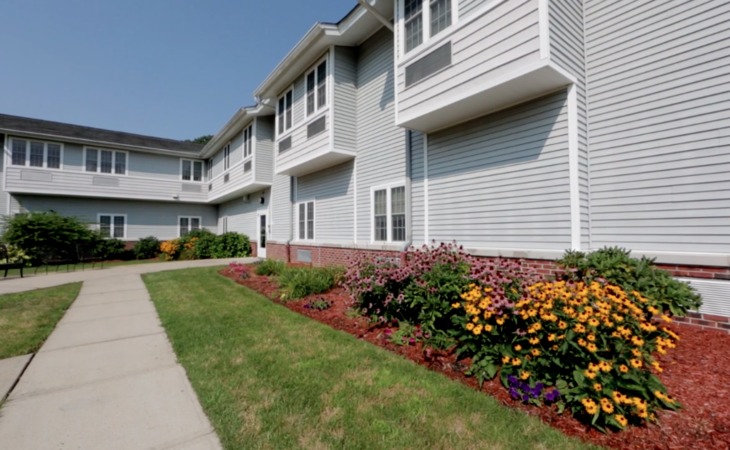 Services and Amenities of CareOne at Wayne

About CareOne at Wayne

The newly renovated CareOne at Wayne, which is easily accessible via Routes 287, 202 and 80, offers separate Care Units specializing in Orthopedic Rehabilitation, Post Acute Care, Long Term Living, Respite Care, and Memory Care. This lovely Center is also home to a gracious Assisted Living Community, ensuring comfort and dignity while offering an unprecedented continuum of care under one roof.

CareOne at Wayne believes that wellness is the result of superior clinical care and unsurpassed attention to service. We are committed to personalized care delivery, supported through a variety of unique programs. We offer leading edge clinical programs tailored to individual needs in addition to our acclaimed fine dining, and contemporary recreational activities and amenities.

At CareOne at Wayne, we believe that wellness is the result of superior clinical care and unsurpassed attention to service. Our commitment to personalized care is supported through a variety of unique programs including our acclaimed fine dining program, and contemporary activities and services designed to nurture the body, mind and spirit.

Map of CareOne at Wayne

Other Senior Care in Wayne, NJ