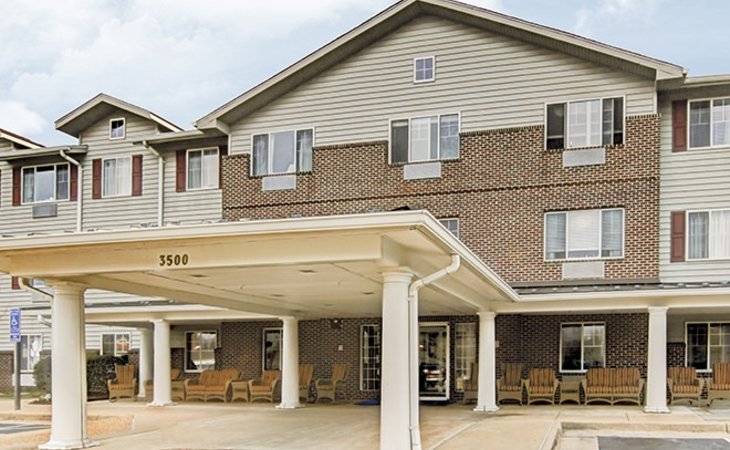 Paramount Senior Living at Fredericksburg was rather run down. It definitely needed some sprucing up. It kind of looked like a DIY project. There were torn screens in the windows, and it just wasn't as visually nice as the other facility we saw.

My mother has moved into Paramount Senior Living at Fredericksburg. So far, it's been wonderful. She of course has been in quarantine ever since she has been in there, so she hasn't had any interactions yet, but she has one more week, and then she will be able to move around a little bit. I haven't seen anything that I haven't liked. Everybody is so friendly, nice, and helpful, and they take very good care of her there. She said the food wasn't as good, but she is very picky, so I'm sure the food is fine. They provide activities, too. All of them are expensive, but this one is reasonable.

Paramount Senior Living at Fredericksburg was a nice place, but the rooms were kind of small, and there was an odor in the building that kind of bothered us. The person who gave us the tour was very nice, very kind, and very thorough. They had the usual lounge, dining room, and physical therapy room.

My aunt is at Paramount Senior Living at Fredericksburg. They're fantastic. The staff is great and always willing to help. Her room is great. She says the food is good, and the dining facility is beautiful. I looked at a lot of different places, and this one had better and the cleanest facilities, a friendly staff, and the price was more reasonable than the others.

Shirley, We really appreciate your feedback on our community. We always strive for a warmth in our community lets everyone know we're happy their here with us.

It's a wonderful place. The people are wonderful, and even with the company getting bought out, all the people chose to stay because they really worked hard to upgrade them and make it a really good place. They're all very caring, and I feel very comfortable with my mother being there. The rooms are large, updated, and have large windows in each one and plenty of space. They're very nice rooms. The food is great, it's really good and they have lots of choices. If the residents didn't like the food that was given, they can request any other kind of comfort food that they want.

I went to this facility with a friend Michael. I was very impressed with what we saw, smelled, heard, and more importantly how we felt. It is a place to call home. We had already been to three or four facilities with in the area but this particular facility felt different. Right from the sit down session with their executive Director through the walk through of the facility. Every staff member that we walked pass stopped and introduced him or herself. The people living there were well kept and all appeared to very happy. We have made our decision and Mike's mum will be moving there

I visited three to four communities but we decided to move Dad here. Residents were having fun outside the building and one can tell how happy they were. Dad spoke with a couple or residents and they all were happy to be there. Dad being a veteran was very excited about the their veterans program. Within two weeks my dad moved in and feels very happy every time I visit

We liked everybody we met. It seemed clean, and the residents seemed very friendly. Everybody was interacting with each other, and they had a big dining hall where everybody could go and eat together. They had lots of activities going on. They had a movie room, and they can go on day trips on their little van, so there are a lot of things going on.

The staff was very polite, friendly, and attentive. The rooms were smaller, because we looked at studios, but it’s bigger than any of the studios I’ve looked at. Mom said the food is good, and I thought it was fine and probably of appropriate portions. They had a band playing, they did painting, and there’s always something going on. They are in the process of doing renovations.

It was a nice place; I am very impressed with it. The first time I went to visit was with one lady, and then the second time I went back, she had actually moved to Richmond. I did notice a big difference in the way the place was. When I went there with the first lady, she knew the place, and she knew everybody there. When I went the second time, the guy that was there was a nice guy, but you could tell he didn’t know that much about the place. They had a nice floor plan. When I went in I saw their social activity board, and I saw they were having social activities. The rooms were of nice size; there’s a microwave, coffee pot, and a small refrigerator. I would probably pick this facility for mom and even for myself. They have their own rehabilitation; it was a one-stop shop except they did not offer transportation. I would recommend this place.

I wasn't as impressed with it. The rooms were smaller, and the activity room was very small meaning you couldn't get all of the residents in to participate; it was the same thing with the dining area. It is an old facility. For maintaining it, they did fine. It was clean, but it just wasn't as spacious and crisp looking. They have very good and professional staff. Their location was convenient, close to a lot of amenities for some family that may be coming in from out of town to visit, but I just couldn't see my mother there with being in a wheelchair and things feeling small and crowded.

It was a good place. It was clean, but too much of a nursing home type facility. The help would be good for my dad but not appropriate for my mom. The residents that we saw in wheelchairs looked well cared for. Stacey was a sweetheart there.

It was very nice. It's one of the places that I was thinking about. It's a brand new facility. Looking around the facility, it was very lovely. The people who gave me the tour were very nice and very helpful. They called and followed up.

It had good-sized rooms. The rooms were pretty clean. They did not smell like a nursing home, as I had anticipated. I called them one morning on my way to work, and I went over there and met with the individuals there. The staff was very personable and very attentive. They have outings. The facility was nice. It was convenient as far as where I work. That's another plus, and it seemed to be very secure as well

The staff was great, they showed us everything. They were very knowledgeable and very courteous. The rooms would accommodate both my parents. All around, it's a great place for them. They offer activities from playing cards to listening to music to putting on shows and taking them every place they need to go. I highly recommend the community.
See all Assisted Living reviews (16) See fewer reviews

I toured Paramount Senior Living at Fredericksburg. Everybody that came and talked to me was very friendly. They showed me the dining room, which was nice, and it was very clean. Everybody was very friendly. I looked at a two-bedroom in the independent living. It was clean and nice. They were willing to remove carpet or put down a new flooring, whatever you wanted. It looked like it was well kept, so I would approve of that. The rooms are very small, even in the independent living, because you're probably eating your breakfast, lunch, and dinner downstairs. They have a refrigerator, and a sink, and you could probably get a microwave in there. The price that I was looking at is way beyond my budget. I can't afford it. The staff member said he has just started work there. He was very friendly, nice, and very informative. He understood the needs of people, and I think anyone that went there for their loved ones would get excellent service. I really didn't see any activities, but he said there were lots of activities. They have an arts and crafts room, and of course they have birthdays. They offer two options for the food. The upkeep was excellent.

I visited Paramount Senior Living at Fredericksburg. The tour was nice, the people were nice, and I had no complaints. It was nice, they were in the process of remodelling, and they were keeping things neat and orderly. They offer three meals a day and there's a community room with movie nights. There's the chance to go from independent living to assisted living.
Get Costs 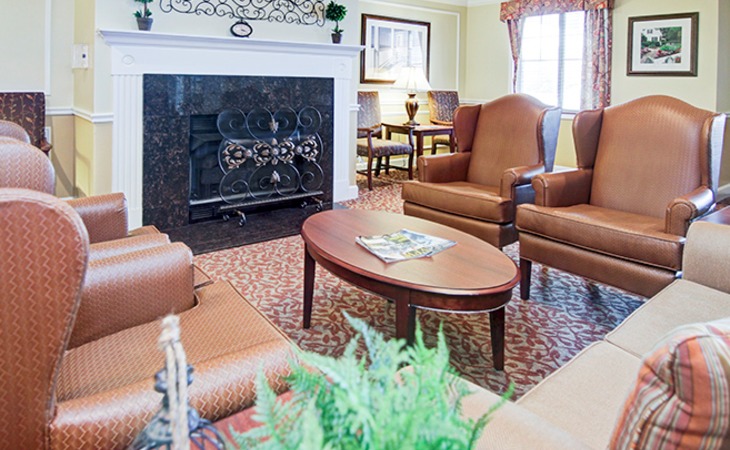 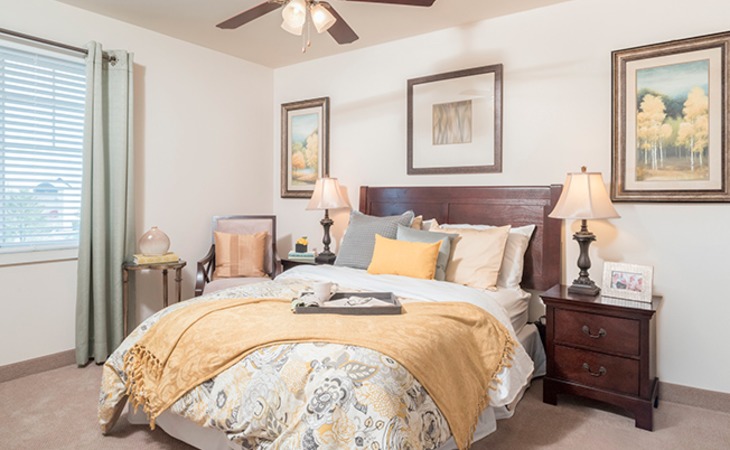 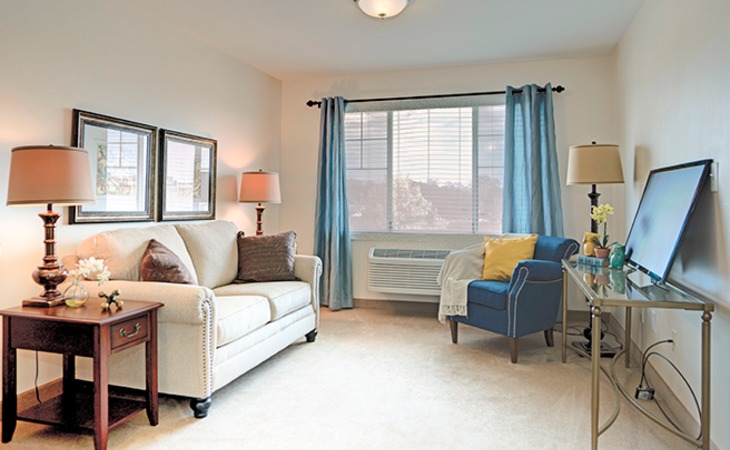 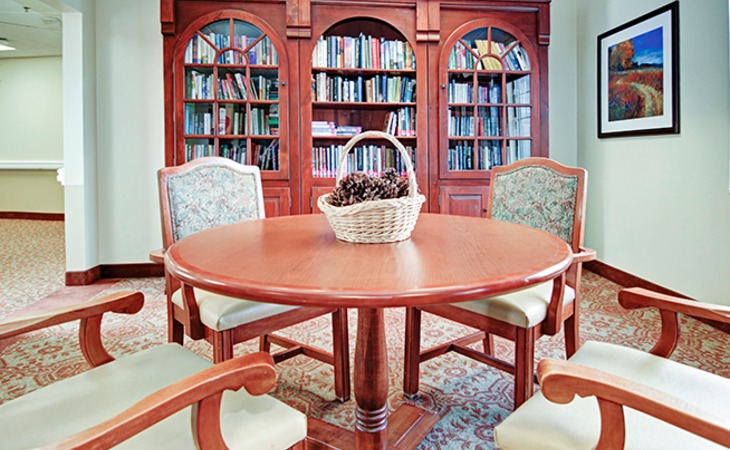 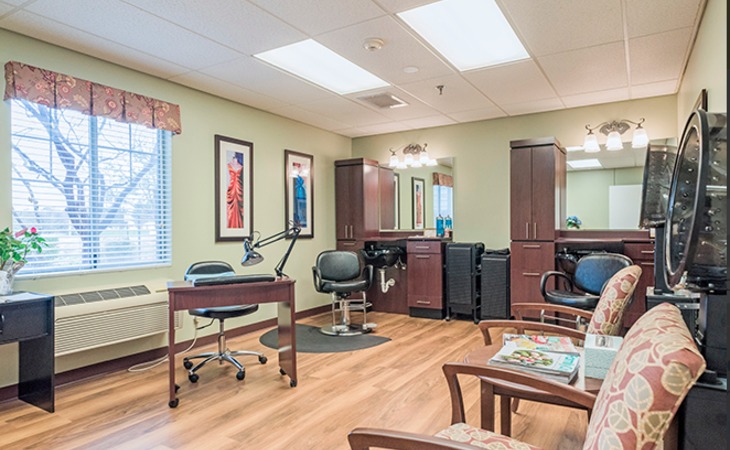 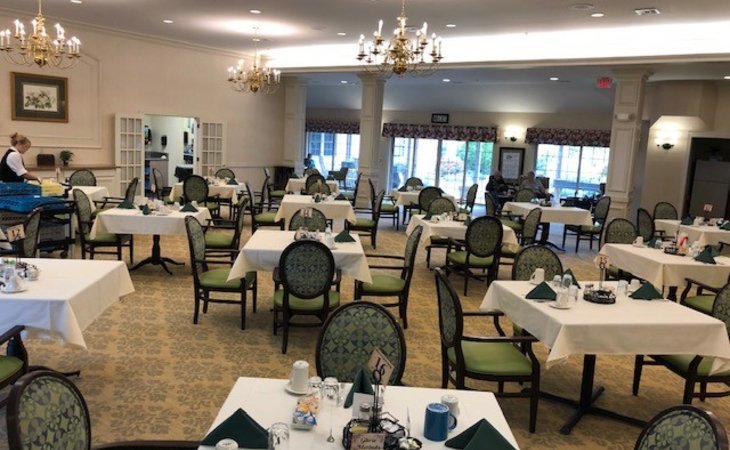 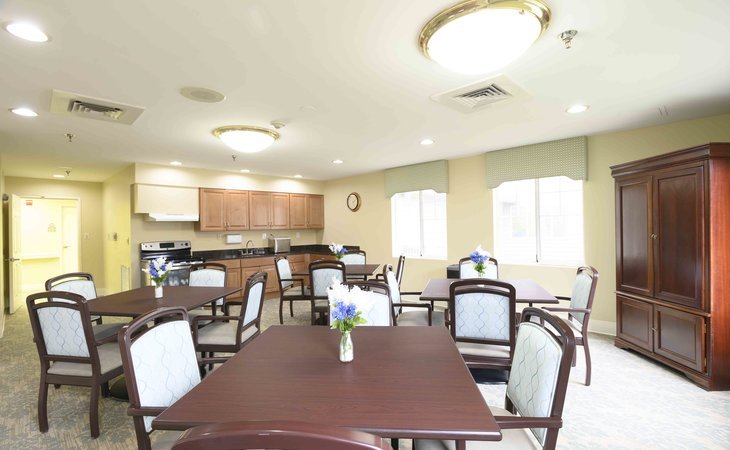 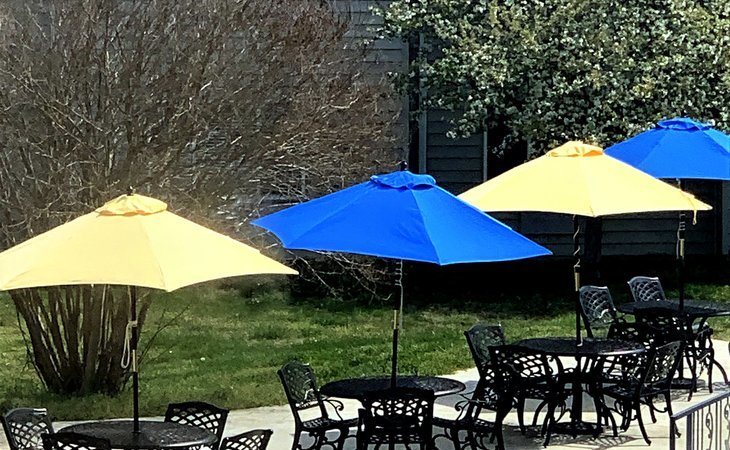 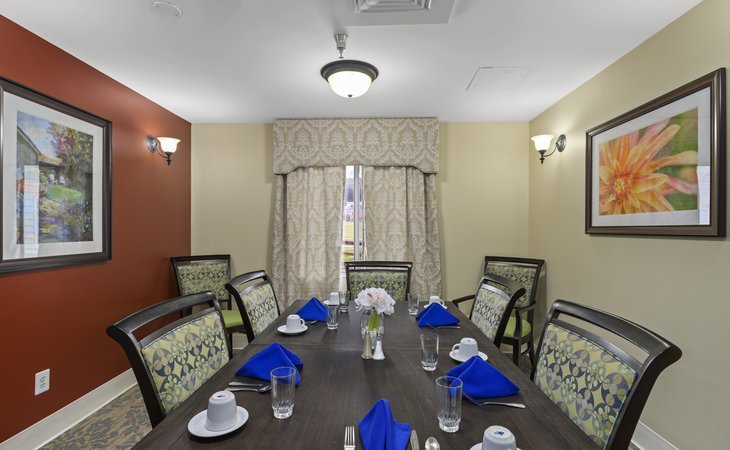 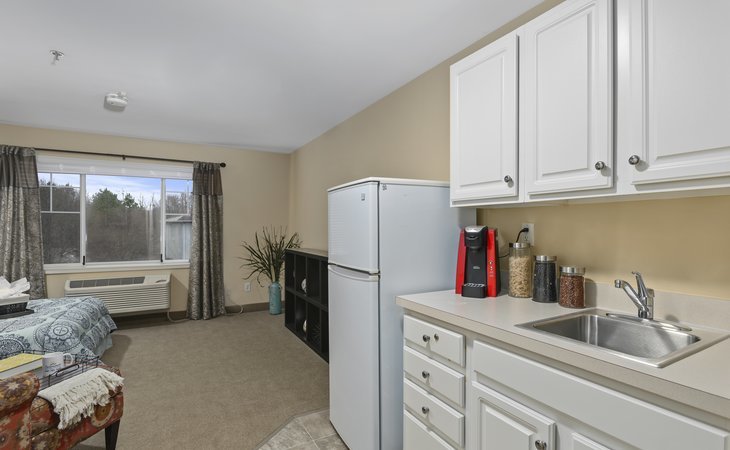 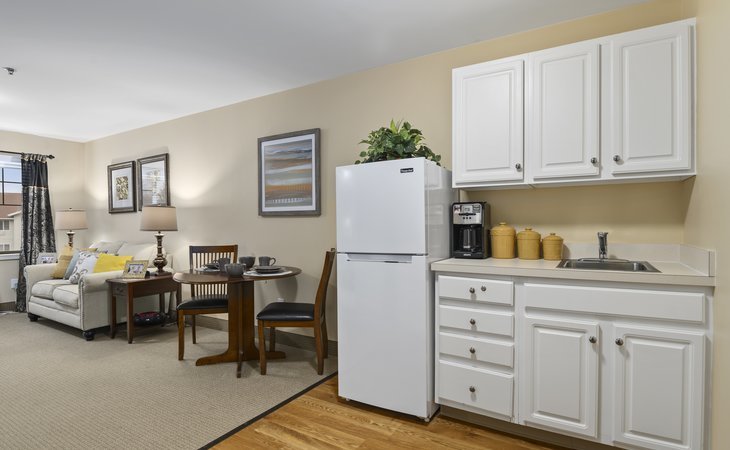 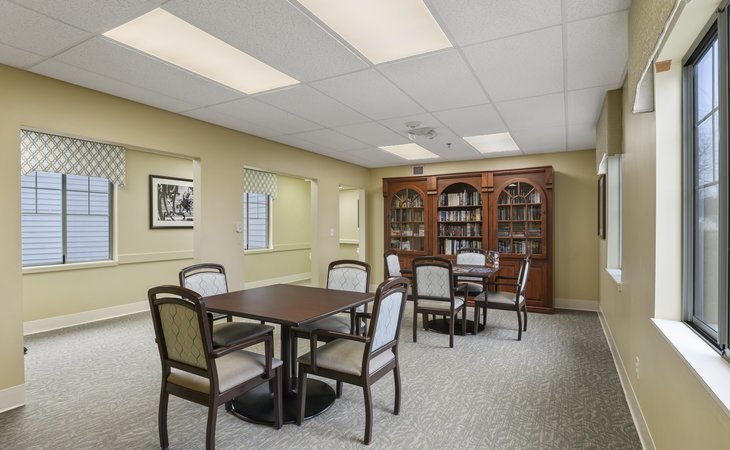 Services and Amenities of Paramount Senior Living at Fredericksburg

About Paramount Senior Living at Fredericksburg

Paramount Senior Living at Fredericksburg promises to maintain its position as the premier senior living facility located just south of Washington D.C. We are built on a commitment to our residents and their families. We believe no two residents are alike, so the services and attention we provide will never be exactly the same. From our state of the art facility to the staff that treats each resident like family, Paramount is the most comprehensive senior living campus for every level of care. We offer a variety of lifestyle services and care options for all residents.

By providing these choices, we not only offer solutions for today, but we provide the security of knowing there are options for tomorrow.

Variety of comfortable community areas, including:

We understand that each resident is an individual with unique needs and preferences. That’s why we meet with residents and families and conduct an assessment – prior to move – in and at regular intervals after move-in, to understand the need for assistance and support in the following areas:

We provide the highest quality of care to the senior population in which we serve!

Other Senior Care in Fredericksburg, VA