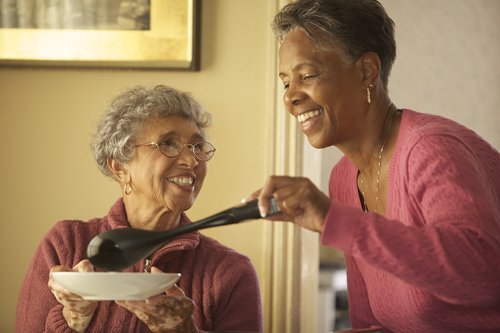 I have decided to go to Oak Park Retirement. I find it very warm, personable, clean, and with lots of amenities. It's community living so it's independent living. I visited the place just this year and it's quite lovely. They have an activity bus and they have activities every Thursday. They go to different places in the community, whether it's the theater or parks or restaurants or wherever the people want to go. I looked at the rooms too and they're fine, quite adequate.

We reside now in Oak Park Retirement. it is a retirement community. They feed us, and they clean our rooms. It is not an assisted living, but it is nice, and clean. They have activities. It is a premium place. The food is excellent, except you eat in the same restaurant. However, you get three meals a day seven days a week. You're going to get a little bit tired of eating there, but they have a varied menu.

Oak Park was very beautiful and well-lit, and the residents seemed nice. I ate there, and the food was very good. It seemed like a very lovely place. I would recommend someone ttgo see what it is like. They have a physical therapist and a recreational therapist. They play cards, watch TV, and take people on the bus to shop. You have your own living space. The people looked like they were very active. I liked it. If my sister-in-law decides to come down, this is where she will go.

I like Oak Park very much. The staff is very nice. The place is very clean. The efficiency rooms are very small. The one-bedroom is very large but not worth the asking price. The food is very good.

Oak Park Retirement was nice and had anything that I needed. The room had its own bathroom. The staff was friendly and nice.

The Oak (Oak Park Retirement) is not an assisted living, but it has everything that I need, and I can take my dog with me there. I really liked it. It was very clean. The staff was very friendly. The meal that I received when I visited was very good. I really enjoyed meeting the other seniors, too. You have your own apartment with a little kitchenette, and it was not like living in just one room. I saw two of the apartments. The first one was big and had an alcove for your bed, a balcony, a big bathroom, a living area, and a little kitchenette, which doesn’t have a stove, just a refrigerator. They serve three meals a day and a snack. They have activities and take you places. They offer a lot to keep you busy. I really like them. Because I don’t drive, they came and picked me up.

You can hire somebody to come in to give them medicines, they will make appointments for the people and take them to their appointments, and Oak Park was really nice. My dad didn't like it. They were really good over there. They were very helpful.

My uncle lived in Oak Park for about a month. It was an assisted living place. It was close to his nephew. It was a good place to live at. They provided good services, the rooms were clean. The staff and the food were good.
See all Independent Living reviews (8) See fewer reviews

We've been pleased with Oak Park Retirement. The facility is nice and the staff has been nice. My mother seems to be pretty happy there, so we're very glad about that. They have apartments. All of them have access to on-campus staff that stays there. Each person has their own apartment, or each couple has their own apartment. And then they have ways to get in touch with the staff, like by pull cords. They can get in touch with the staff 24 hours a day, so they're not there by themselves. They have three meals a day provided, they have home nursing care that they can pay for separately if they need it. Like for someone to come in and check on meds or anything like that. They have physical therapy onsite that they can get through Medicare, and they have transportation, which is all the things she needed. In their apartments, they can't have stoves, but they have full refrigerators and they can have microwaves. So she was able to manage both of those, I just didn't want her to have a stove that she could turn on and possibly leave on. With the staff being there with her all the time, then I don't worry about her falling or her, you know, putting something on a burner and leaving it, which were my two big concerns with her staying at home. The staff is helping her manage her medicines. And then I'm over there all the time. So she's getting her meds on a more regular basis now that she's got some kind of checkup with her. So hopefully, she can age in place here. It does not mean somebody is just in her face all the time to care for her, she just needed more help than what she could get at home, but not nursing home facilities yet. She doesn't do her own cleaning because they have a cleaning staff. She doesn't do her own laundry because they have someone that comes in and can do your laundry, so she's got her laundry service. And so basically she is in her apartment, but she's not there by herself. She could call anybody and have the staff up there in three minutes. It's a win-win for people that aren't ready to get into assisted living, where they tell you when to wake up and when to go to bed. So this way she can kind of do her own thing. She can either go down in the dining area or she can eat in a room, so she's fine with that. We were thrilled with it. I haven't met anybody that didn't act like they cared. I know they get paid for that, but they've stayed close to keeping up with what they said they would do. They said, "We'll keep an eye on her and we'll let you know if something goes on." When I walk in over there, they're like, "Hey, she's doing good. We saw her with some new people today." And so they seem to care about the people that are in there and they seem to care about the people in their facility. I think they have great food. It's not seasoned like you would season it if you were just doing it for a family because they have different needs over there. But anything she's wanted, they've got it for her. If she said, "Hey, I have this recipe", they fixed it. The chef is nice, I've met him, and the food is very tasty. It's clean and neat, it's decorated, and pretty. I've never gone in where there was trash on the floor and the staff wasn't working right behind it to keep everything cleaned up. They've got a great walking path, they have bingo nights and all kinds of games, and they have all kinds of trips. They have their activity calendar. I wish I had that much to do, honestly. It's a little expensive but it's for our peace of mind. It's a pretty place, it's a little pricey, but it's still cheaper than having to go if you don't need the services of assisted living. What killed us was that she didn't need somebody to help her take her medicine and do things like that, but we were going to have to pay that price anyway. But here, she didn't have to pay for that extra care.
Get Costs

Other Senior Care in Salisbury, NC