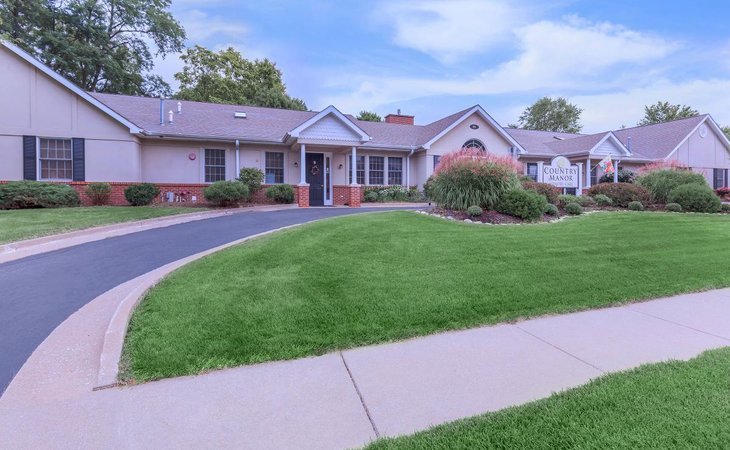 So far, I love Country Manor. My husband is doing so much better there. They have a gorgeous, big, fenced-in yard with lots of trees and flowers that they can go out and walk around in. So that's one reason why I got it, so he can go out as long as it's nice. They have benches and chairs and swings and things for them, so I love that part of it. The help there is extremely helpful and very good with the residents. I have been there several times on several different shifts and met a lot of the girls that take care of the patients, and they are all tremendous. I have been there at meal times and I have tasted the food, and it's all very good. He always eats every bite of it. So far, I just absolutely love it. I can come and go whenever I want and I'm always welcome there. They take very good care of him. He wasn't getting baths and things like he should have at the last place, and he gets them here. He gives them a little trouble, he's a little belligerent, but they do very well with handling him and bypassing his efforts to get out of taking showers. They're very good about it and I have no complaints whatsoever. I have been there every week, I don't care what day you're there, what time you're there, those people are being taken care of and that was important to me. The room, they had just painted it and cleaned it before he moved in, and it's very clean and very nice. It's big enough that he has a dresser, a nightstand, two chairs, a little table, and his bed. None of the rooms have their own bathroom, the one he uses is right across the hall from his bedroom. There are three of them in each section of the rooms. So there's one practically outside of every room, just right across the hall, so that's not a problem. They're very good about helping him get his clothes out. His room is always spotless and his bed is always made. I am extremely happy with the place. They threw a birthday party for one of the residents. In the last place, my husband was inside his room all the time by himself, and now he goes out. They have two big living rooms with couches, chairs, and a TV, and he goes out and sits in them and talks to the people. In the dining room, they have a gas fireplace with two chairs, one on each side of it. So he likes to go out and sit in front of the fireplace and talk to anybody that's wandering through or roaming around. He seems to be much more content than he was, and he's eating well. They can have seconds if they wanted, most days. He had lost weight in the last place, and he's gaining it back because he's eating well now. I am just so happy that I moved him, he's doing so much better over there. It's a small place, and I like how it's more like a family than being in a nursing home or a big memory care facility. Everybody talks to everybody and the help all treat them like they're family. One of the patients was laying out on the sofa in the living room taking a nap, and they said, "We told them they could do that. This is their home, if they want to take a nap on the couch in front of the TV, that's fine." There's a lot of room for people to sit and talk. They've got flower beds and they've got planter boxes. The flower beds are waist-high so they don't have to bend over to see the flowers. And they planted tomatoes in one of them and they've got little cherry tomatoes planted that they told them when they got ripe they could eat them. And so they all keep watching the little tomatoes to see when they're going to get ripe. You can always get a hold of somebody to talk to, I get everybody's cellphone numbers so that I could call and talk to the nurse if they're not at the building. When it's nice enough, they let the people go outside and there's always somebody there with them even though it's fenced in.

Our overall experience with Country Manor has been good. I like that it is total memory care and not a nursing home. I like their evening staff very much. Some of the day and nighttime staff weren't quite as good, but their evening staff was good. The surrounding itself are very nice and well kept up. The location is in a very nice neighborhood. It's not like it's all by itself.

Sandra- Thank you for taking the time to review Country Manor. We take pride in providing Red Carpet treatment to all and will pass your comments on to the Executive Director.

We chose Country Manor for my mother because it's closest to her children and because of the affordability. We haven't been back to visit her since we took her because of the virus, but I haven't heard any complaints. When we were there that day, the staff was pleasant. Her room was clean, and it was a nice size for two people. You certainly don't feel claustrophobic. It wasn't like a traditional nursing home. It was homey and comfortable. They have a piano, which my mom loves and plays for the other residents, and they all love that. They have a nice family atmosphere. They have some activities, an outdoor courtyard, gardening activities, and games.

Lee- Thank you for taking the time to review Country Manor. We are so glad to hear that your mother is actively engaged and enjoys the courtyard and that you are pleased with the overall experience.

Country Manor is very friendly and clean, and the people are easy to work with. They were able to show us around both buildings and the courtyard. They said that even when you're there for the day program, you'd still have a room. The rooms are very nice and clean.

Thank you for visiting our community! We are very proud of the welcoming atmosphere and our dedicated team. Please come back and visit us again soon - we look forward to the opportunity to care for your loved one!

My Mom was a resident at Country Manor Davenport. Be sure to ask lots of questions about when your loved one no longer qualifies to stay there. My Mom was refused the right to come back to her home after a short stay in the hospital. We were given short notice to find another home for her. I feel a home that truly cared about the families and residents could have offered more compassion than what was shown.

My mother was in Country Manor, and it was wonderful. It was a great place, but we had to move her out, and they helped us find a new place, so we're very happy. She was in a room with another resident, but it was big, very nice, and clean. They had activities for different types of stimulation, she has dementia, and it kept them busy. They have personal caregivers for each resident, and it was a very nice situation. It was very homely.

We took my mom to Country Manor in Davenport, and that is where she is. It has been wonderful. We are perfectly satisfied with the care she is getting. It is a fantastic place. They are very family-oriented. They take care of us as well as our mother. It is a really top-notch place.

My mother is recovering well in Country Manor, and I am extremely pleased. The staff is very caring and very professional. The room is nice and clean. It is an up-to-date and attractive place. The grounds and location are excellent. It is in a friendly neighborhood, so it does not have an institutional feel about it. It is very home like and has good food. It is very nice and the price is very reasonable. I will recommend this to others.

Country Manor Memory Care was small with a very limited number of residents and seemed dark and not very inviting. We feel that our father will not be happy there. It’s a very nice facility but it’s way too small and very limited of what they do at the facility. The director of the facility gave us a tour; he was very pleasant and very accommodating. There are some activities for the memory care patients to do and board games. Other than that, I did not see a whole lot. They have a nice garden are in the back.

My mother is at Country Manor. She has been there for two years now. I can't say enough good things about them. The people that work there are amazing. They keep in constant contact with me. They are so caring and involved with the residents. They have fabulous activities. The place is spotless. I couldn't have picked a better place for my mom. I would highly recommend this facility to anybody that is in that area.

Country Manor Memory Care is not too big, but not too small. It's has a nice and clean atmosphere. The staff are friendly and just very caring. They are not overly expensive. My aunt lives there. Her room is a nice-sized room, and it's nicely decorated. It's well lit with nice windows. Their dining area was very nice. I didn’t taste their food, but it looked OK.
See all Memory Care reviews (11) See fewer reviews
Get Costs 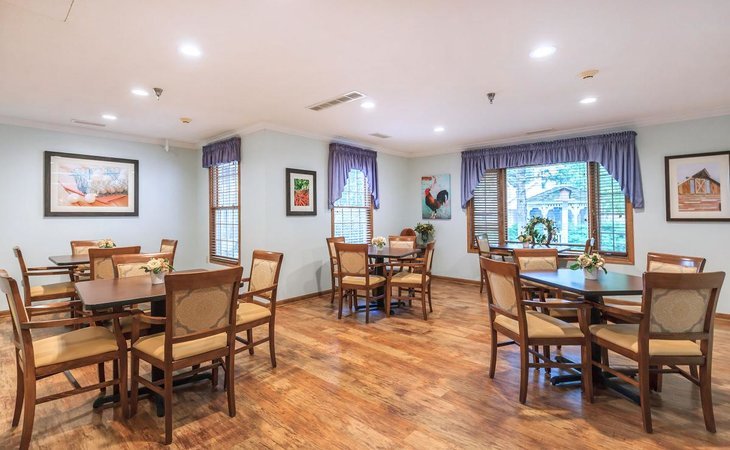 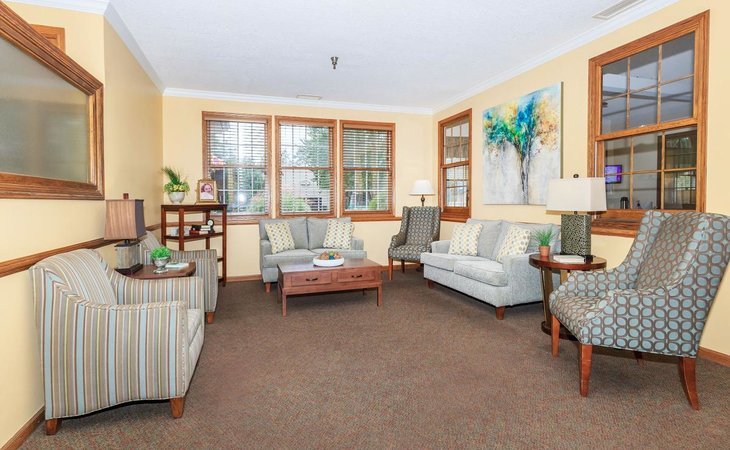 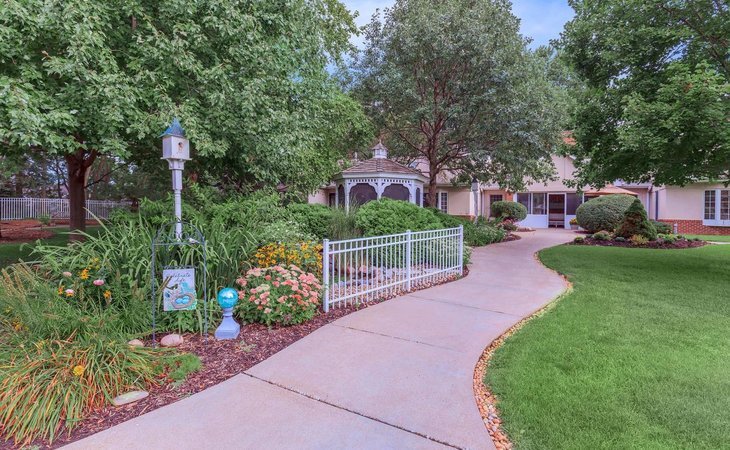 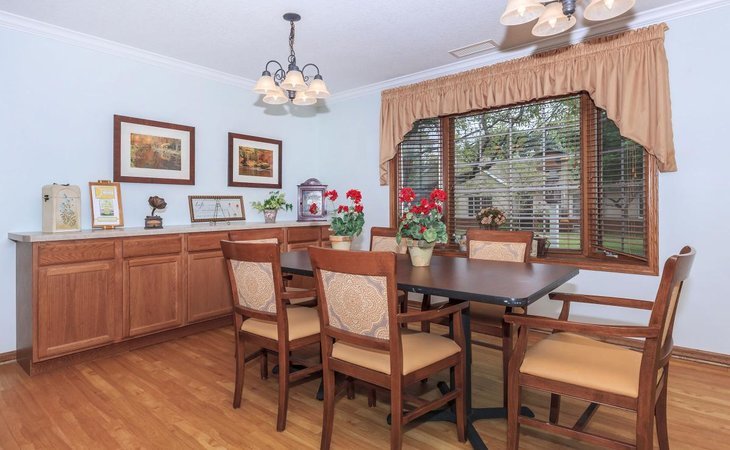 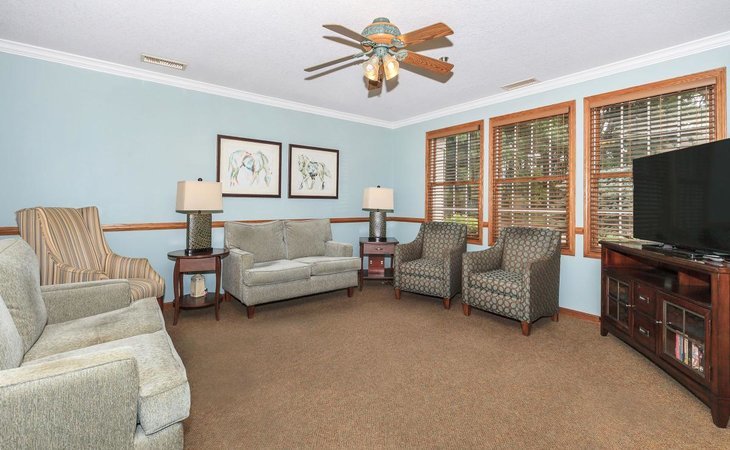 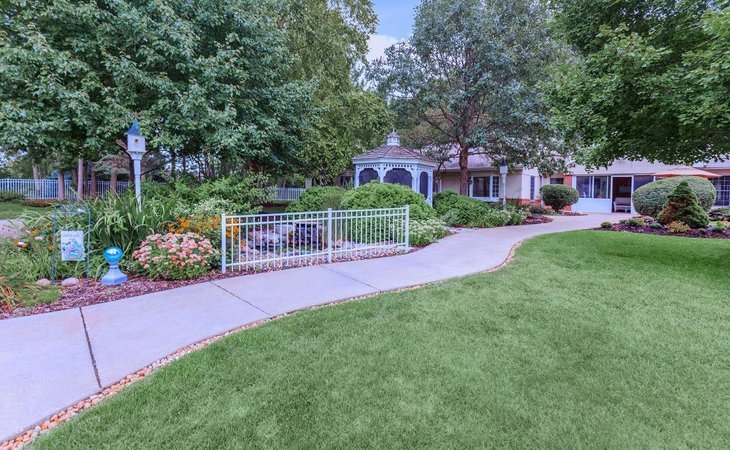 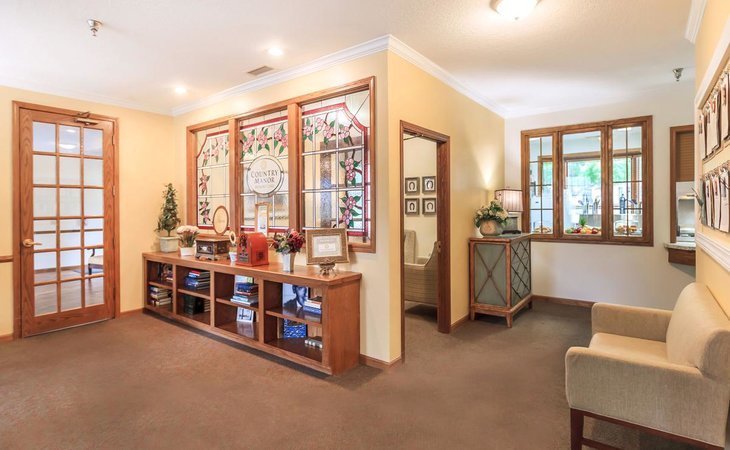 Services and Amenities of Country Manor

As dedicated memory care experts, we recognize the fear and distress caused by this debilitating disease and we are here to assist residents and families navigate this traumatic terrain. From the start, we aim to build a deeply rooted relationship and connection with your family that brings peace of mind and answers to the difficult questions that arise, and to provide relief, letting you know that you and your loved ones are embraced by a community that truly cares. Our professional, 24-hour staff is dedicated to enhancing the quality of life for our residents and providing the high-level of care they deserve.

Other Senior Care in Davenport, IA