My mother is a resident of Allegheny Place. I don't think it is very good. They have bad communication with the family. The facility is nice and comfortable. My mom's room is spacious. They should definitely improve their communication and more cleaning. My mom's room does not get cleaned as often, and her clothes don't get washed as often as they should. They have different activities like bingo and crafts. They have different events like happy hours and things of that sort where they serve snacks and play games. Their location is good. It's not the best neighborhood, but it's not the worst. Their justification for taking my mom from no level of care to a level care one didn't make sense to us. It just seems like they're just about raising the price and getting as much money as they can for their resident.

Thank you for sharing your feedback. We are disappointed to hear this, as our residents are always our #1 priority. Our personalized pricing structure is based on the care needs of the individual, and we aim to be as transparent about that as possible. Please contact our Enlivant Cares line to elaborate on your experience. Thank you!

I toured Allegheny Place Senior Living Community. I thought it was a nice facility, but it was the first one I've ever been to, and I thought it would be a little less lonely looking. I'm not used to nursing homes yet, and they look kind of lonely. I went in the afternoon and no activities were going on. I saw the 1-bedroom and a studio. I thought they were clean. I only came in contact with the person who was interviewing, and she looked professional, and she was very professional. There was a large room where everyone would associate but I didn't see the amenities too much.

Allegheny Place in Penn Hills has a lanyard with a call button on it, and the rooms are able to control the temperatures for the residents individually. Those two features are what my mother-in-law liked. It's assisted living and she moved there recently. We had anticipated a little more, but there were shortcomings in communication when she moved in with regards to procedures. For instance, she is supposed to get a menu at lunchtime to order her meals for the following day, and until I brought it to their attention, they weren't giving her the menu. Her mind is good, so she was aware and was like, "I don't know what I'm getting, and nobody ever gives me the menu." The air conditioning unit also had a foul smell when we moved in, and it took almost a week for them to rectify it. Those things were taken care of, of course. Also, they didn't set her up for a shower schedule and they were supposed to do that upon move-in. Again, I had to go to them and ask them to set that up so if I were not there advocating for her, I don't think those things would have been addressed. Once they were addressed though, it was good. She doesn't care for a lot of the food, but eats them. They do have activities listed, but he has chosen not to participate in them. Most of them are trivia contests and she's not interested in that, but I know they have several activities every day. The facility looks very nice and it's very inviting. One of the reasons we chose it is that it appears very clean and it doesn't have any odors. We're paying completely out of pocket and there's no financial aid for her. They told us that the dining experience should be one such as you're going to a restaurant to receive food. The first few days she was served cold meals, they were brought very late, and portion sizes were all over the place. The taste was mediocre. Again, unless you advocate for the person that's there and request the services that you're paying for, they can be overlooked, but once you tell them that, "Hey, we need X, Y, and Z," then they will do it. It's just that you have to remind them to.

My mother is in Allegheny Place. It's nice because it's all on one floor. There's a lot of space where they can walk around. The middle of the place is like an outdoor garden and the building goes around. They can walk around the inside of the building. They have bingo and card games. They feed them breakfast, lunch, and dinner on a regular basis, and the food is really good. Her health has improved since she has been there. They take very good care of her, and they give them things to do. Every time I call they're very responsive. They let me talk to her and answer my questions. Everybody is friendly. Her room has its own bathroom, but she has provided her own television. It's warm, abd the window that she has looks out on the garden, so it's kind of scenic, and it's a nice size. It has a sink, a refrigerator, and a microwave. It's comfortable. They have a community room that has couches, chairs, and a television set, and that's where they do a lot of their activities. They're never bored.

Allegheny Place was a lovely place. The director of the facility was very knowledgeable about the place. They were doing some light exercise courses when we were there right in the main lobby, and they brought fresh-baked cookies out. We really liked the facility, but the rooms were very small for my in-laws. Their nurses came out and did an assessment on my father-in-law and they were very thorough, respectful and they gave us a good idea of what area or how many ADLs he would've required if he would've been there. The staff has followed up with me many times. The dining area looked very clean, but the place was a little bit dated.

My mother is going to Allegheny Place. It is better than the other three or four places I went to see and within our budget. The family is pretty close, and it is a nice community setting. I like that it is clean and does not smell when you walk in. It is a nice place, and the staff is nice. I was impressed with it. The amenities were pretty good. They have the washer and dryer, and if they need help, they get help. They have a little computer room and therapists and doctors who come in. I had a pretty good meal there. I am happy with it. I have been there about three times taking care of business, and every time I have been there, it’s has been the same. It has been nice and clean, and the staff is helpful and professional. I like it.

Allegheny Place was a first class facility. It was new, bright, lively, and very attractive. The staff was very professional, very nice, and knowledgeable. They have different levels of rooms. They had single rooms, and they were beautiful. It was a large, bright dining room. They had numerous activities daily. It was a beautiful but very expensive facility.

It is located in a good neighborhood, and the grounds are very well kept. However, it lacks accessibility to stores and stuff. If you have a vehicle, is it ideal, but if you are walking like me, it is a bit far. Everything is on one floor. I think the room is small, but it has its own bathroom and a kitchen with a microwave and refrigerator. The dining area is like a restaurant with tablecloths, napkins, utensils, and drinking glasses. Most of the meals are good, and there's plenty to eat. They have activities for us every day. We recently have had gardening and games. They have a courtyard, and I like it.
See all Assisted Living reviews (8) See fewer reviews
Get Costs

Describe the overall population of assisted living residents at Allegheny Place. What is their average age? What are their favorite things to do?

Our residents range from early 60's to late 90's. Our residents like to spend time in our courtyard, play bingo, listen to live entertainment and go on outings to their favorite places.

What programs or activities does Allegheny Place offer to enrich residents' well-being?

Activities include morning exercise, bingo, arts/crafts, manicures, live entertainment, outings, playing cards/board games... Activities are based on the interests of the current residents and change with each new member of our community.

We have a van for transportation to Dr appointments 2 days per week. If an appointment is scheduled for another day, we will assist you in becoming a member of Access.

What makes the chef or dining program at Allegheny Place exceptional? What kind of menu can assisted living residents expect?

All of our food is prepared fresh in our kitchen by our chef, with love. Our residents can participate in a food council meeting to share ideas with the chef. Once a week, the meal choices come from this meeting. Our residents have various choices to select from: main course; heart healthy; soup of the day; salad of the day; fun food; comfort foods.

For our residents who may wander, we offer wanderguards. Our doors are also alarmed an locked nightly at 8pm.

How does Allegheny Place keep residents' families informed about their loved ones?

Phone calls or in-person conversations/meetings. Our doors are always open and a family does not need to schedule a meeting to discuss anything going on in our community.

If Allegheny Place accepts dogs or cats, what indoor/outdoor areas can they enjoy?

We do accept cats and dogs. We have an enclosed courtyard.

What ongoing senior care training does the staff receive?

Our staff is required to complete 2 online trainings and attend an in-person staff meeting each month.

What safety features or security measures does Allegheny Place provide to protect residents who wander?

We offer wanderguards and the doors are alarmed. 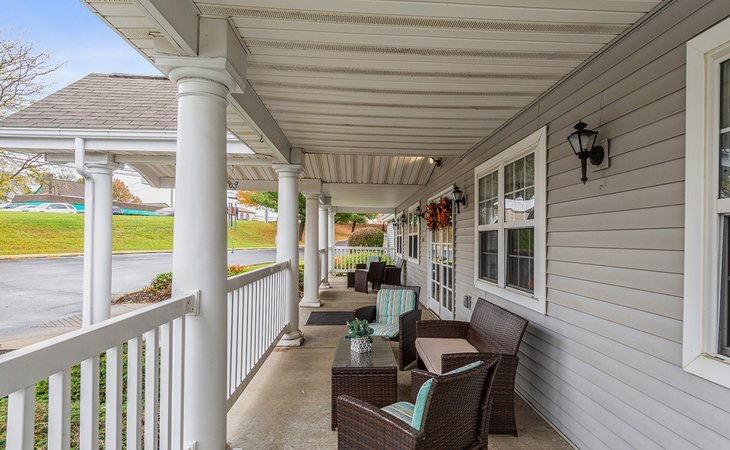 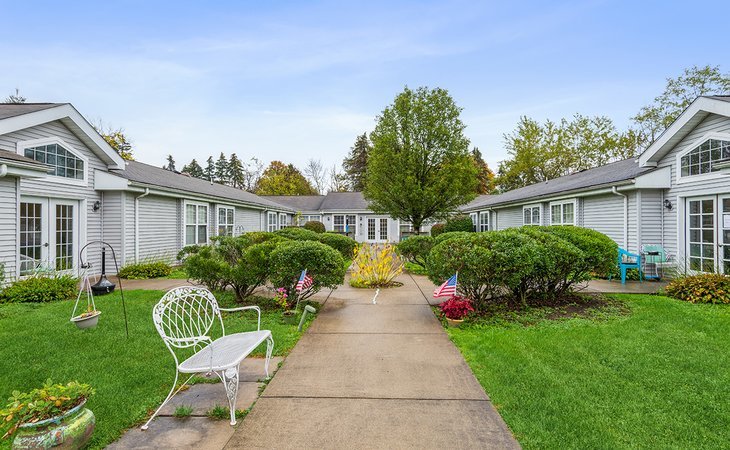 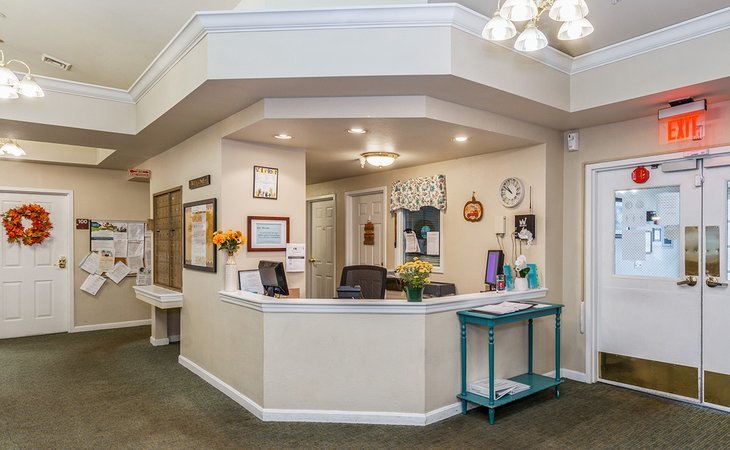 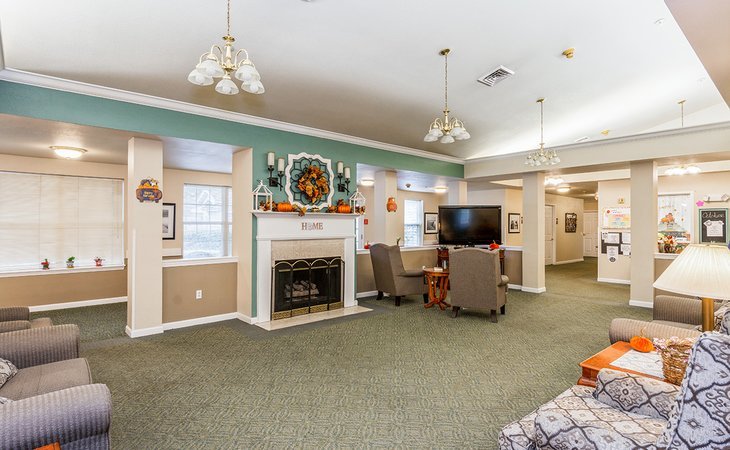 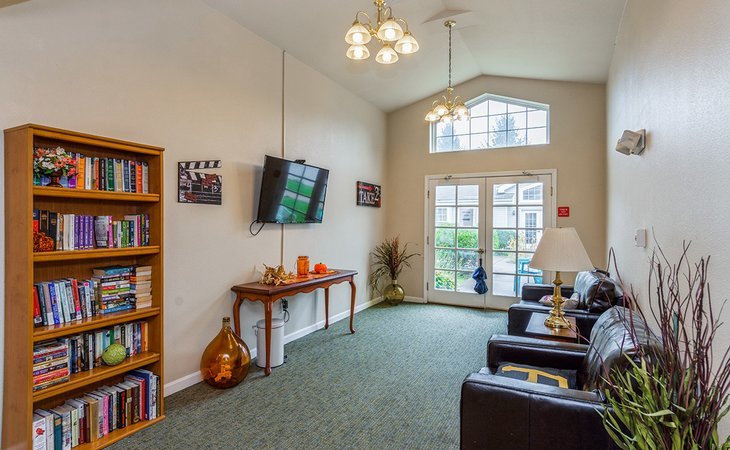 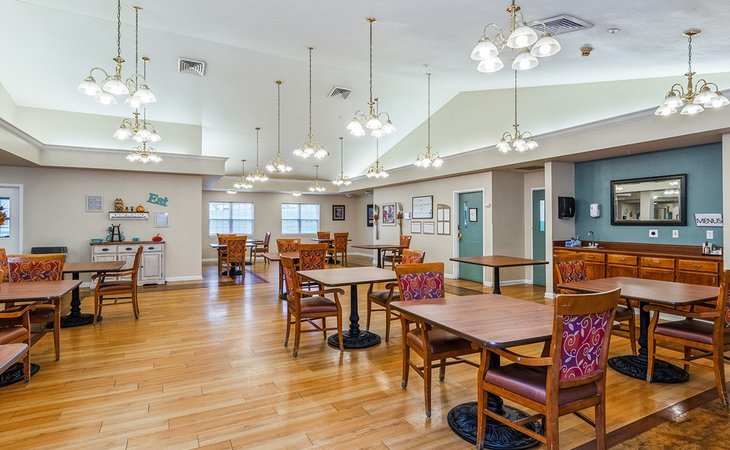 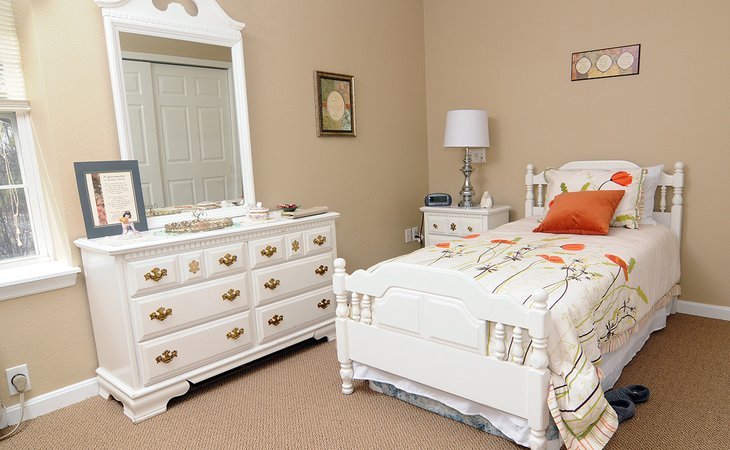 Services and Amenities of Allegheny Place

At Allegheny Place, residents are at the center of our small, homelike senior living community. We develop individual care plans to meet the needs of each resident, and a full-time registered nurse and licensed practical nurse are available 24-hours a day to provide clinical oversight and coordination of care. Our community offers activities to help residents thrive in mind and body, such as bingo, card and board games, daily exercise, arts and crafts, ice cream social and music programs. Our beautiful, pet-friendly community features a private courtyard where residents can garden, relax and socialize in the fresh air.

You will love our convenient location--right across from St. Bartholomew's church!! We have a very warm and homey setting with an internal courtyard, which is completely enclosed and very safe. It has raised beds so that residents can garden, but since it is square-like, safe for our dementia residents to wander while enjoying the pleasures of fresh air!