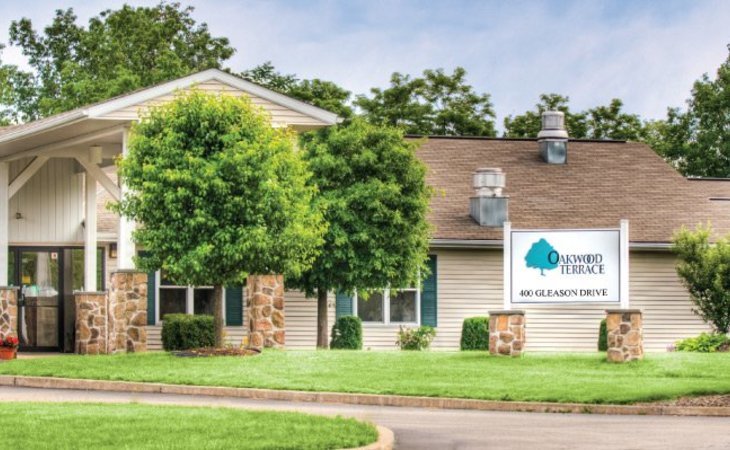 I toured the memory facility of Oakwood Terrace and I thought it was very good. My issue was that it ended up being a little farther away than I thought and that was the only reason I didn't go with it. It was very nice and clean, they had a lot of activities available, and I thought it was an, overall, good facility. The staff was very nice. They were polite, informative, and they answered all my questions. The rooms were very nice too. They were clean, bright, and sunny. It had a kitchenette or a small kitchen area on the floor itself but the individual rooms only had beds and bedroom furniture. They had a fitness area and a salon available but I did not go into them. The place was very nice and seemed to be a happy kind of place.

I liked Oakwood Terrace. It was just one floor and the memory care residents could go outside if they chose to. They weren't kind of trapped inside. The apartments were a little bit smaller, but they're not bad. They had a decent-sized private room and shared room. There's a toilet and a sink in the actual room, but for showering, it was a separate room, which was a nice, big room. There's also a walk-in tub if they chose to do that. The staff I met was very, very nice.

My mom moved into Oakwood Terrace. It's a facility that is specially geared for dementia patients, which was in the best interest of my mom. One thing I liked about Oakwood was their professionalism there. They were very kind. The facility itself I like too, it's a smaller facility. It's all on one level. It's like in an X form, the whole area is about to be one and a half to two acres, and it's fenced in. So they have a beautiful outdoor facility where they have raised gardens, where the patients can plant flowers, vegetables, things like that. They have the freedom that they can walk that facility, and even go outside without having any alarms going off or anything. It's a much more conducive atmosphere for the patients, so I like that. My mom is Catholic so they are very religious like statues of the blessed mother in there. Priests came in and so that was a religious aspect of it. It was also what I liked, just doing a lot of social activities, like she said during the COVID, of course, they couldn't do as many, but they're starting up again. Like I know this Saturday they're having a cookout. They're going to provide hamburgers and hot dogs, and family and friends can come and bring a covered dish, so it makes the family able to participate and be a part of their family. They were very conducive, even for the payment situation. I'm going to be short about a thousand dollars for what the cost is, but I have applied because my dad is eligible, he was a service member, so it's for the aid and assistance. And they told me that what they would do is, because sometimes it takes quite a few months for that to come through, they're not requiring me to pay that up front, they're going to keep it as a balance until that comes. That made it easier. They are all inclusive, which is a good thing. When I took my mom there, she wasn't happy about it that day, but they had techniques they could use to be able to ease the transition for the patients.

Oakwood Terrace was a beautiful place and decorated like someone's house. You can barely tell that it was an assisted living place. The staff was very accommodating. My tour was very nice, and they answered all my questions. The residents seemed happy and well cared for. It's all memory care and always locked down, so it was very reassuring. They had an outdoor area for the residents and they can't get out of there. It was very nice with gardens, and the people are free to come and go.

Oakwood Terrace was nice and homey. They had various little houses, but they were all connected. Each house had a kitchen, living room, various rooms, and a central common room where they do activities. I was impressed by the staff. They were all very nice and informative. The dining room was nice, and it was almost restaurant-style dining. They were playing shuffle board when I was there.

Oakwood Terrace is top-notch in the staff, the actual facility, the meal preparation, and the cleanliness. It’s just great.

Oakwood is a modern facility, well layed out surrounded by scenic gardens. The staff is well trained and very friendly. I am always made aware of any changes in her condition. My aunt is a picky eater. Their food service staff bends over backwards to provide her with something she will eat.

Outstanding, very caring and compassionate. Each person is treated with love, respect, and dignity. There is always time for you and the ones you love…no matter what.

I would recommend Oakwood as the best assistant living in the valley. Everyone from administration thru housekeeping was always accommodating and on top of things. They treated my mom with dignity and respect. Oakwood is a very warm and soothing place as you walk thru the front door.

The quality of life of the residents is astonishing. I love how qualified the staff is and how fun and relaxing an atmosphere they provide. The scenery is nice for the residents. My aunt who is 97 years old absolutely loves it. This is not your stereotypical nursing home. Life for the residents is unparalleled for the situation they have been given throughout their lives.

Oakwood Terrace is a fairly modern facility with a beautiful layout. The senior citizens are given a fair amount of activities to enjoy as well as social time. The staff are mostly friendly with a few exceptions, as you have nearly everywhere. The facility also has an outdoors area for the seniors to sit outside and walk through as they wish, weather permitting. Security is decent although they do have a breakout from time to time, however the staff are attentive and stop attempts by seniors who don't really know where they are leaving to. overall I would give this facility a 3.5 out of 5.
See all Memory Care reviews (12) See fewer reviews
Get Costs

Services and Amenities of Oakwood Terrace

If you or a loved one are dealing with Alzheimer’s disease or other forms of dementia, you don’t have to face memory loss alone. At Oakwood Terrace, a licensed personal care home, we focus on care and programs that help people cope–even thrive–while managing the issues of dementia. Our well trained, dedicated staff is on hand to help you and your family:

At Oakwood Terrace, new neighbors become old friends, and well-trained staff members become trusted caregivers and confidants who can be counted on to lend a helping hand and give needed support at any time.

All residents benefit from a full program of services:

Private and companion apartments include:

Our state-of-the-art community, our experienced staff, and the services we provide all revolve around the residents. Since 1996, we have been striving to provide a pleasant, safe, and engaging place to call home.

Other Senior Care in Moosic, PA