How the Rosalynn Carter Institute Is Helping Caregivers
By Sherri Snelling, guest contributor to Caring.com 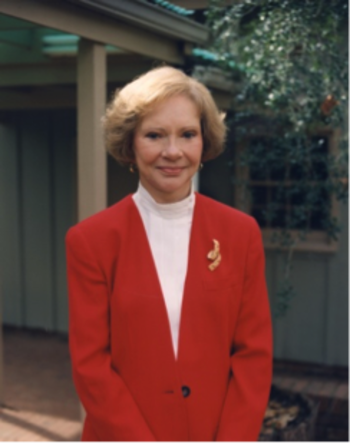 When it comes to being "first," Rosalynn Carter has accumulated quite a list. She was the firstborn child in a family hit hard by her father's passing when she was only 12. She was First Lady, proudly serving our country next to her husband, former President Jimmy Carter. She was first to hold a caregiver conference that identified issues such as burnout and guilt. And she is extremely proud to sponsor the first and only caregiving program at a major university: Her namesake, the Rosalynn Carter Institute (RCI) for Caregiving at Georgia Southwestern State University in Americus, Georgia, started in 1987.

For this "career caregiver" who has taken care of numerous family members beginning when she was just a young girl, she stands by her words that are often repeated worldwide:

In her book, Helping Yourself Help Others: A Book for Caregivers, Carter writes, "We can learn to approach caregiving as a blessing as well as a challenging task."

She knows of what she speaks: Rosalynn was 12 years old when her father was diagnosed with terminal leukemia. As the eldest daughter, she helped care for her ailing father and supported her mother, who had to find work, by also caring for her younger siblings. She took up caregiving again for several relatives who had cancer after she left the White House, and she was a caregiver for her mother, who died in 2000 at age 94.

During President Carter's years in the White House, Rosalynn Carter became a champion of mental health issues, particularly for caregivers of those with mental illness. Almost forty years later, our country still struggles to understand the complexities of mental health and the stigma attached to caring for the mentally ill. Unfortuantely this stigma often causes family caregivers to avoid getting the help they desperately need.

"The first thing we focused on back in the 1980s was caring for the caregivers," Carter recalls. "I spoke at a caregiving event back then and audience members came up to me afterwards crying, saying that this was the first time someone understood what they were going through."

"People don't want to admit that they are caregivers; they feel it is just their responsibility to care for a mother or a grandmother," says Carter. She says that, beyond self-identifying as caregivers, "they also have to recognize the need for help and be willing to receive help."

She realizes this is easier said than done. I asked her if she had identified herself as a caregiver through the years and she laughed as she replied, "No, I didn't realize I was a caregiver until I got involved in this work."

She also hopes for continued understanding and acceptance of those with mental health issues. Her ongoing goal is to help our nation move toward eliminating the shame that surrounds these individuals and their family caregivers. While she believes there is more attention to issues such as bipolar disorder, schizophrenia, Alzheimer's disease, and posttraumatic stress disorder (PTSD), we need to move beyond awareness to acceptance, and she feels we're not there yet. Her most recent book, Within Our Reach: Ending the Mental Health Crisis (with Susan K. Golant and Kathryn E. Cade), is an overview of what needs to be done in this country to understand mental health as we understand physical health needs.

One area of pride for Carter is the Rosalynn Carter Institute for Caregiving (RCI). She is still actively involved in all aspects of the RCI's mission, which is to establish local, state, and national partnerships with organizations focused on quality, long-term home- and community-based services to help caregivers. RCI activities include a variety of advocacy, academic, and awards and scholarship programs. While many of the caregiver programs are Georgia-based, they are examples that help lead the way for nationwide caregiver support, education, and training.

"We are a society increasingly dependent on caregivers," says Leisa Easom, RCI's executive director. Easom stresses that this is why caregivers need to learn to self-identify. "Caregivers are often invisible and selfless, which makes them an overlooked group."

When she began RCI, Carter reached out to organizations such as the American Heart Association, the American Lung Association, the American Medical Association, and other groups that could help both family caregivers and healthcare professionals. Amazingly, all these groups agreed that caregiving was critical to the health of the patient, but no one had any focused caregiving programs. That was then. Over the last three decades, Carter has been encouraged by the public support for caregivers. She points to essential government programs such as the National Family Caregiver Support Program, authorized as part of the Older Americans Act and administered through the Administration on Aging. It provides grants to states to help caregivers keep loved ones at home for as long as possible. She also believes that programs such as the Lifespan Respite Care Act are critical to helping caregivers with a huge issue identified back in those early 1980s meetings: burnout. To avoid burnout, caregivers today can find respite services, training, and other information through the ARCH National Respite Network and Resource Center. "Of course we always want more, but it is wonderful to see how this issue [of caregiving] has become a major, major issue," says Carter.

Sherri Snelling, CEO and founder of the Caregiving Club and author of A Cast of Caregivers "“ Celebrity Stories to Help You Prepare to Care (Balboa Press, Feb, 2013) is a nationally recognized expert on America's 65 million family caregivers with special emphasis on how to help caregivers balance self-care while caring for a loved one. See full bio

READ THESE NEXT: Online Support Groups for Caregivers Ideas & Inspiration for Caregivers 7 Best Resources for Alzheimer's Help Find Senior Care Near You